Washington DC defends its building height limits—will Honolulu be able to do the same?


“Peter May, a National Park Service official, said the commission’s action is ’affirming that [the 1910 Height of Buildings Act] contributes to a unique and special experience’ for District residents and visitors.

Building heights in the city are ‘a matter of national interest,’ he said. ‘It is about quality, it is about human scale, it is about being a welcoming city, not an imposing city.’ ”

It looks like Washington DC is not going to let its viewplanes be destroyed by increased height limits. Honolulu should revisit the license given to the HCDA to grant exemptions to city and state ordinances and laws. Or why not abolish the HCDA entirely? Do we need to transform Honolulu into Manhattan or Hong Kong, and won’t that hurt our tourist-based economy as well as wreck infrastructure and transportation tolerances on the island?

The article below includes an interactive image demonstrating the effects of increasing height limits. It links to a gallery of other images showing how DC would look if height limits increase. You click on various heights on the images and the buildings stretch upwards accordingly. 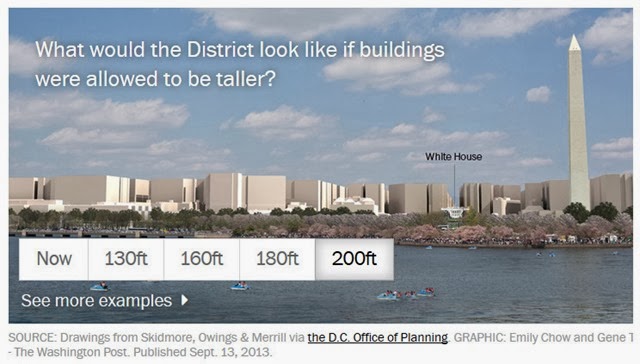 Well done, I say. We could use the same demonstration for Honolulu.

The National Capital Planning Commission voted 7 to 3 to remove language from a staff report that said the 1910 Height of Buildings Act should be amended to exempt areas of the city outside the historic core planned in the 18th century by Pierre L’Enfant. Instead, the report will say that the issue is worthy of further study and future consideration.

Replace “matter of national interest” in the following snip with “economic interest” and it would apply to Honolulu, as would the concern for quality of life.

Building heights in the city are “a matter of national interest,” [Peter May, a National Park Service official] said. “It is about quality, it is about human scale, it is about being a welcoming city, not an imposing city.”

if we want to protect remaining ag land from urban sprawl, what alternatives are there to increasing the density of already existing urban areas (like with bigger, higher buildings)? are ranch style single family homes the most environmentally sustainable alternative to increasing urban density?


No argument. But is filling Kakaako with condos for rich buyers, where there are no supermarkets or other services, the answer? Right now, developers drive development. Contrast this with Portland's approach--a great example of city (and transportation) planning that seems to be working for everyone.

Also, it doesn't look to me as though any government agency is protecting ag land.


Of course, because of DC's height restrictions, it is surrounded by towers immediately outside it and exurbs stretching to West Virginia. Also, DC's viewplanes are based on significant buildings aligned along streets and boulevards, not geographic features. Increasing the building heights in DC does not interfere with viewplanes inside of the city, though it may interfere with the viewplanes of those outside the city looking in (from their towers that aren't allowed to be built inside the city).