Post-mortem of special session on marriage equality will be interesting

Hawaii’s legislative process is far from perfect. There is opportunity for all kinds of shenanigans and perhaps even corruption during any session. Despite any criticism, we have seen many good laws passed here. Our state legislature has done some outstanding work over the years.

An analysis of this special session will highlight both the good and the bad aspects of our legislative process, and for once, a large segment of the population is watching. Either in person, or via TV, or by following tweets, they are engaged. Perhaps there will be interest in refining how we pass laws in this state [stay tuned for information on a Kokua Council panel discussion, “Making good government even better” scheduled for Nov. 25].

Also, legislators will find that their utterances this session are documented in social media. Sure, I could ask for a copy of the House Journal and post it here (maybe I will do that), but citizens have a real-time communications network of our own, which is in high gear during this special session.

The public record will the the legislative journals, but also, I suggest, tweeters such as Mileka Lincoln (Hawaii News Now Reporter) have provided documentation that is not only instantaneous, but lasting.

I am in awe of the fast tweets Mileka is broadcasting to anyone caring to tune in. You need not be a twitter user. Just point your web browser at http://twitter.com/milekalincoln and refresh the page occasionally (or FireFox can do that for you).

Just now, I see that Rep. Ward will likely have to answer for his floor comments after the session.

A “gay marriage” curriculum at the DOE?? We should remember who thinks this will actually happen. 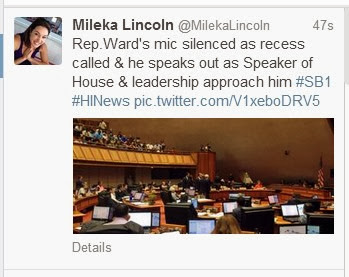 The bill will likely pass into law, making Hawaii the 16th state to legalize same-sex marriage. I won’t mind checking in with Rep. Ward in the future to ask him if his prediction has come true. Besides, if he thinks it takes a marriage equality bill to start discussion on something that (though it may surprise him) is already commonplace even without a new law, he hasn’t been paying attention.

It’s clear that at least some reps may be grandstanding for the sake of re-election. One has already said as much. In my book, doing the right thing is more important than one’s own re-election, but that might be a stretch for lawmakers anywhere. At least, it must be on their minds that their vote on SB1, one way or the other, will be taken into account when they next stand for election.

On the “responsible” end of the spectrum is Rep. Cynthia Thielen, the one Republican to support and vote for the marriage equality bill. Here is a snip of a statement she has made on this bill:

It became clear to me that Hawaii's Civil Unions law no longer was adequate when the United States Supreme Court overturned significant provisions of the Federal Defense of Marriage Act in June 2013.   It does not, and will not, permit Hawaii's committed same sex couples and families to achieve federal rights and benefits now being afforded to same sex married couples in the 15 states and District of Columbia which recognize same sex marriage.  Hawaii's "separate but not equal" Civil Union status is no longer providing equal rights to all, and Hawaii's same sex couples and families are presently being denied over 1000 federal rights and benefits which can only be provided to them when Hawaii does permit and recognize all marriages on an equal basis.  I am convinced that the time for equal recognition is now.

I also strongly respect the freedom of religion guaranteed by the Constitution and believe that the proposed bill guarantees and protects those rights.   Churches are broadly protected under the bill and can refuse to perform same sex marriages in their parishes.  This legal protection for religious organizations and their nonprofit operations is the strongest in the nation.

We surveyed all constituents in our 50th District this year, asking if they supported or opposed same sex marriage.  Fifty-nine percent were in favor.  With over a ten percent Survey response, statisticians have explained to me that there is a very small margin of error.

Thank goodness for Rep. Thielen’s thoughtful, well-reasoned view. I expect that her constituents will continue to appreciate her.

Switching for a moment to the opposition—should the bill pass, how will they find closure for their highly charged emotional stand against it? I hope we will not see a clergy-fueled revenge movement at the next election.

As a result of the marriage debate in HI, I recently discovered your excellent blog. I have bookmarked it. In particular, what brought me here was your analysis of the written submissions to the HI House and the issue of duplicate submissions. In that regard, I wanted to direct your attention to claims by Republicans that 87% of the submissions and 80% of the witnesses were opposed. I'd be interested to here what you make of their claims


We posted both the methodology used and a spreadsheet demonstrating how the count was inflated by duplicates (not to mention infants and children!). A considerable investment has been made by certain churches in particular to grind out testimony. A church does have an advantage that way--they have a generally obedient flock. Much of the testimony was duplicative and used similar or word-for-word rhetoric.

Of course, the Republicans in opposition will cling to these numbers. It's been their most powerful argument against the bill. They also call for a popular vote. Should a vote take place, there would be similar admonitions from certain clergy and others that will whip up opponents.

Democracy is sometimes quite complicated. Is a majority truly a majority if it is whipped up by authority figures?

The article which you referred to did not indicate any attempt to eliminate duplicates or otherwise analyze the submissions. It was in their interest, clearly, to state the raw numbers as though that were an indication of popular opposition. Instead, it may simply reflect the power of the pulpit.

I'll stick with our numbers, which seem more in line with national polls as well.

Here's your post-mortem: the fine residents of our state will promptly forget about this issue and who voted on which side of the question. They will then re-elect the same people in return for some glad handing, a little local pork and free food at the campaign stops.

Lot of noise, howls of outrage, claims of fighting to the death...and then the voter turnout will be 45% and we can go back to the same, same.


You are undoubtedly correct. Let's see how it plays out. The system has not experienced a "shock" like this in my memory, something might still shake loose.

I suspect that part of the reason this was dealt with in special session is because deferring it to the regular legislative session would have brought the battle too close to the 2014 election season.