I have no crystal ball to tell how this Republican-induced paralysis of government will turn out, but I’m thinking that it could finally cause some citizens to snap out of their apathy.

In no particular order: 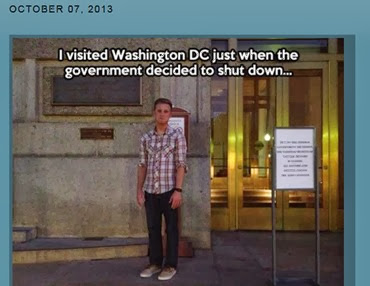 Visitors, both from other parts of the country and from overseas, have saved up for their visit to the Nation’s Capital, only to be greatly disappointed—and they seem to be blaming the Republicans. Click the pic for the rest of this poor guy’s blog post of his trip.

While blame is spread around a bit, based on a Google search, few visitors seem to be blaming the shut down on Obama who is trying to give all (well, at least more) Americans health care.
2) Speaking of health care, the Affordable Care Act websites have had problems, but tens of thousands at least have been able to get through and choose a plan. If the Republicans keep pushing short-term spending extensions, there will be people who…:

… and so will (I hope) resist Republicans’ call to roll back the ACA and leave them once again without insurance. Certainly, the newly and happily insured will not blame Obama for the government shutdown.

The longer it takes Republicans to drop their attack on the ACA and to normalize our government's budget, the more people will have insurance that they wouldn't dream of giving up.

3) Republicans desperately want “entitlements” such as Social Security and Medicare cut or privatized. That’s nothing new, but senior citizens have been relatively passive about it, though they are a large voting block (and they typically vote Republican). Should the debt ceiling not be lifted and social security payments be skipped or delayed, perhaps they will finally get up from the couch and yell about this.

Here’s hoping that our government comes to its senses rapidly, but if it doesn’t, it could be payback time for the Republicans.

That is, if anyone remembers come election time 2014.