Food stamp recipients, and the Hawaii economy, about to take a hit tomorrow


“… if you're a House Republican, you don't care about the people who will be left hungry.”—DailyKos

“In a world with more than enough food for all, no one should go hungry. No drought or famine explains why one in seven Americans are hungry. This is a purely political disaster.”—civileats.com

Longer term, I hope voters will do something about the scourge of House Republicans. But for now, it appears that food stamps (SNAP) will be cut in just under six hours, if nothing is done, and that Congress will take action later to cut SNAP further:

The thing about cuts to the Supplemental Nutrition Assistance Program—whether the benefits cuts that go into effect November 1 or the $4 billion a year in further cuts that House Republicans are pushing—is that if you're a House Republican, you don't care about the people who will be left hungry. You don't care about all of the people whose employers pay them so little that government assistance is the only answer for survival. You don't care about all of the milk, broccoli, bananas, eggs, and spaghetti that people won't have to feed themselves and their kids starting this week.

What do these cuts mean to people who depend on SNAP?

The USDA says the average monthly benefit is about $275 per household.

The exact reduction depends on the recipients’ situation, but a family of four with no other changes in circumstances will receive $36 less per month, according to the USDA. At today's average prices, that translates to four fewer whole chickens each month.

The last article indicates that for every $5 in food stamps cut, the economy will lose $9. That was a general calculation by Mother Jones. What will the cuts mean to Hawaii?

Hawaii Appleseed LEJ has produced an infographic specific to this state, reproduced below, with permission.

Before you have a peek, please keep in mind that these cuts will take place unless people take action. Petitions may be helpful, but with both Republicans and Democrats unwilling to stand in the way of cuts, it’s not yet clear how to stop the deprivation that will result. Please keep your thinking caps on about this. 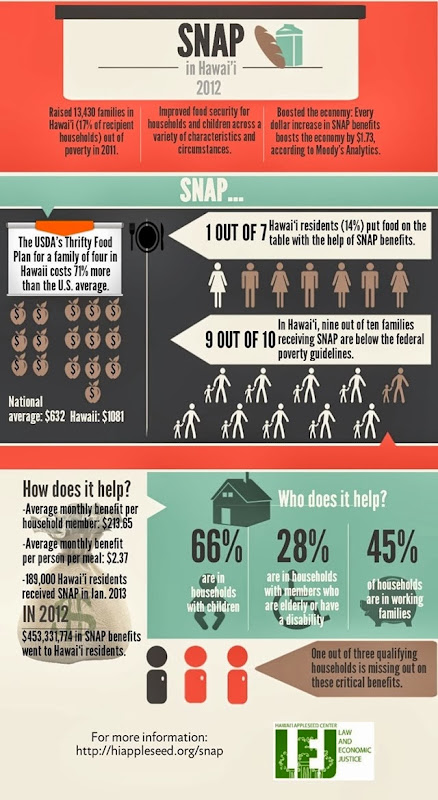