What does this mean? If you don’t know, you’re a member of Gen X or maybe a Millennial. Us older geeks will recognize the above as “Wordstar: Gone but not forgotten” (ok, explanation at the bottom of this post). 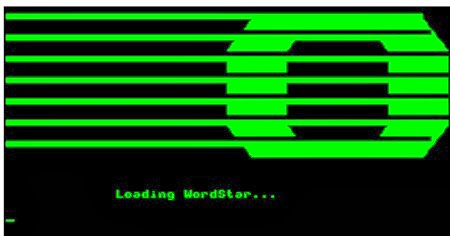 Plenty of good, fast, software was written for CP/M and DOS, before Windows 3.1 came on the scene. Wordstar was the ubiquitous word processing program, and was a disruptive technology way before the term existed. Stand-alone word processing hardware was beginning to challenge the typewriter when Wordstar appeared on the scene and doomed those expensive machines to the buggy-whip scrap heap.

Back in the day, software was expensive and ceased to work when switching computers or operating systems. It used to come on multiple floppy disks that had to be kept on hand in case a system needed to be reloaded, or to transfer onto new hardware. Our first computer had both 8-inch and 3 1/2 –inch floppy disks and a hard disk with 8-inch platters that held all of 5 megabytes (no typo).

Users were very attached to their chosen software. I sadly threw away my Maxthink software several years ago. Maxthink, Hygen and a suite of hypertext programs written by Neil Larson, pre-dated HTML on the web by several years. In my book, Neil Larson is one of the unsung pioneers of the Internet. He and his customers were grinding out fast hyperlinked databases long before hypertext became ubiquitous.

… There was and still is nothing like this on the market in terms of this speed and simplicity - navigating thousands of linked files in Hygen on a 286 computer with 2 meg of RAM was not simply fast, it was instantaneous.

More impressive than this was the philosophy of this technology woven through the help files and instruction manual - how to set up a large hypertext system to encourage thinking. Even more impressive were the group of utility programs used to automate the construction and maintenance of large scale hypertext systems. The author of these products, Neil Larson, leapfrogged all other programs with the simple implementation of his vision of information, knowledge and wisdom and the programs to accomplish this in an automated manner.

I loved the user interface on Maxthink, fairly described by users as an“idea processor,” that I used as an outliner to store my writing and notes. Then one day, on a new OS, I couldn’t run it. In fact, I’m not sure where my Maxthink data has gone to at this moment. It’s probably around on a disk someplace … (sigh)…  and yes, I took backups, but that software also doesn’t run any longer.

Returning to Wordstar and the title of this post before we close—^B means “control-B”. It means “start of BlocK.” ^K is “end of block.” So the text in between (either horizontal or vertical, by the way) is now blocked. ^H means “hide”. Not delete, but just hide away. So the translation of the title can be read as “Wordstar: Gone but not forgotten.” Thanks to archive.org, we can now unhide that text.

And when I’m gone, I hope to be buried “9-edge face down” if anyone will remember what that means. (Actually, I want to be recycled somehow, but don’t know any cryptic geek-speak for that).