The SNAP (“food stamps”) program is under attack by an uncaring Congress. Even if Congress does nothing, SNAP benefits in Hawaii and nationwide will be cut in 27 days from now. More people here will simply go hungry.

If Congress is interested in punishing the poor, they can do so simply by doing nothing to stop the cuts. And as you may know, the House Republicans intend to cut the program even more deeply—if they can get away with it.

Below is an infographic produced by Hawaii Appleseed LEJ and posted here with permission. Click on the image for larger, or better, read more at the link.

As you can see, Hawaii families are even more dependent on SNAP than the national average. A thrifty food plan costs 71% more here. 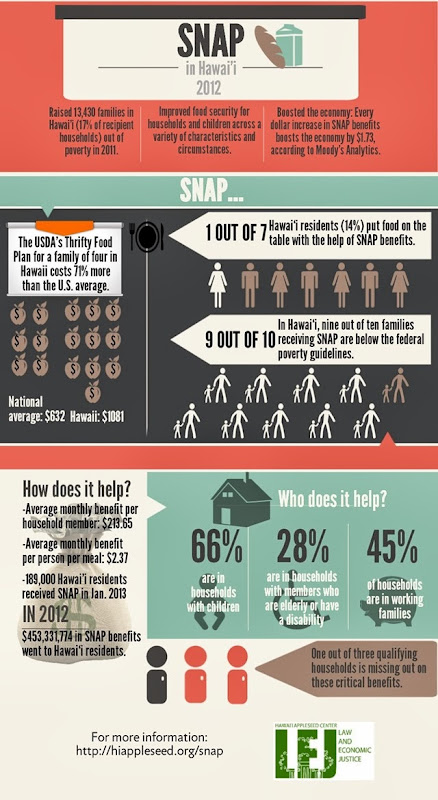 So now you have the facts. What to do? We live in strange and perilous times when it appears that our so-called representatives seem motivated to work against the best interests of their supposed constituents. The vote is a poor (though basic) means to defeat their intentions. For one thing, we can’t vote today, we can only vote later. And strangely, voters have very poor memories.

But public dislike for Congress is strong right now. This may open up new possibilities. While the Hawaii delegation can be counted on to vote in our interests, they are part of the House minority. They’ll do the right thing even in the absence of our urging.

So how about faxing Speaker John Boehner instead? Tell him whatever you like. Maybe how many more people will hate him if he lets SNAP benefits be cut. Whatever.

Or support organizations that will carry the message to Congress that voters will not forget, come next election, what they are doing today.