“When he was running the Army's Intelligence and Security Command, [NSA chief Gen. Keith] Alexander brought many of his future allies down to Fort Belvoir for a tour of his base of operations, a facility known as the Information Dominance Center. It had been designed by a Hollywood set designer to mimic the bridge of the starship Enterprise from Star Trek, complete with chrome panels, computer stations, a huge TV monitor on the forward wall, and doors that made a 'whoosh' sound when they slid open and closed. Lawmakers and other important officials took turns sitting in a leather 'captain's chair' in the center of the room and watched as Alexander, a lover of science-fiction movies, showed off his data tools on the big screen.

'Everybody wanted to sit in the chair at least once to pretend he was Jean-Luc Picard,' says a retired officer in charge of VIP visits.” —PBS News Hour, quoted in Guardian article

The NSA has no intention of giving up their wholesale spying on the world or on US citizens. They’re too entrenched, and they’re having too much fun. 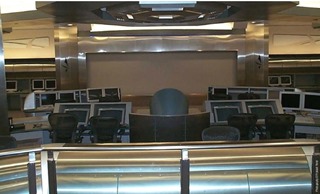 Congress, for its part, is basically just gritting its teeth as the Edward Snowden revelations dribble out, knowing that one day the show will come to an end, and they won’t have to deal with it any longer. NSA and other officials have not yet been whipped with even a wet noodle for lying to Congress, an indication of how upset our representatives aren’t.

A little bit of war in Syria would be just what is needed to take their (or, should I say, our) minds off of the spy scandal that has flared like a forest fire and isn’t even “15% contained,” as the newspapers have come to report on those conflagrations.

Darn, John Kerry’s inept diplomacy took away their chance for a war diversion. In answer to a question, he actually suggested a peaceful resolution of the chemical weapons issue that was picked up by Putin. Peace doesn’t hold the spotlight for long, and the two-year long mass killing in Syria does not seem to earn public attention, so the NSA leaks could pop back on front pages any time soon.

So what next? Probably another fiscal cliff would do the trick. Standby for that.

We interrupt this rant for a short message:

A little attention to fiscal matters would not be a bad idea. If Congress does nothing, in about 46 days and 2 hours from now, food stamps (SNAP) benefits will be cut, and they’ll succeed in punishing the poor even more than they do at present. Contact your local congressperson and ask them to do something about this.

Harvard Law Professor Yochai Benkler has an excellent Op-Ed in the Guardian arguing that the NSA is so far out-of-control that radical measures, rather than incremental legislative reform, are necessary to rein it in.

The NSA is, and has been, so far out-of-control for so long, that the chances are that Congress will take meaningful measures to halt the spying are unlikely. Keep in mind that many congresspeople and the judges on the FISA court have known about the NSA program in detail for years, and they did nothing to stop it.

Congress itself is out-of-control and unresponsive to the needs of its constituents. It’s not just the NSA spying. The economy has failed the 99% since the beginning of this great recession, and they have consistently moved to assist only the bankers who caused the problem in the first place while hanging the rest of us out to dry (to “hang out to dry”: “To abandon someone who is in need or in danger. Often carries an element of betrayal of someone who might have expected protection or assistance. If you hang someone out to dry, you abandon them when they are in trouble.”).

I imagine that there are some scenarios where Congress might be forced to take action against NSA spying. One that came to mind: there are 4.9 million people with access to the data, according to early Snowden revelations. There could be another leaker among them. Perhaps the next leaker will release some scandalous “selfies,” a la Anthony Weiner’s, from a congressperson’s smartphone. A couple of those and Congress will have to do something. Quickly.