How to disappear Honolulu skyscrapers

There are no doubt hundreds or thousands of Honolulu residents who wish that plans for the 20-30 condo skyscrapers proposed to be built in or near Kakaako would simply disappear. One of the most common objections is that view planes will be blocked. Rich newcomers will be “stealing” the views that current residents have enjoyed (and paid to enjoy).

Architects have designed a solution for a Seoul, Korea building that we should keep an eye on. That is, until it disappears. 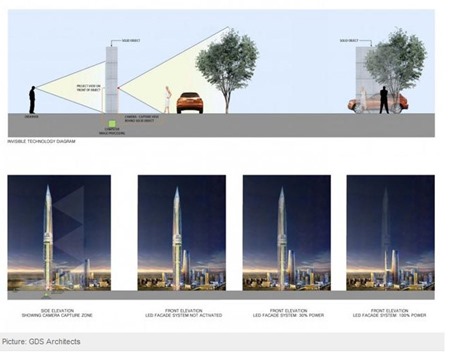 The 450m high glass-encased skyscraper, called the Tower Infinity, will use LED lighting and cameras to create a 'reflective skin' on the exterior.

The optical illusion will make the building seem to disappear, according to its designers GDS Architects

The building has been approved for construction, according to the report, in the Yongsan International Business District near the Incheon International Airport—just the wrong place to put an “invisible” building, you’d think.

The entertainment-themed building will include wedding halls, a roller coaster, water park and a range of restaurants.

The illustrations in the article show how the building is made to disappear.

Imagine if the flock of condo towers in Kakaako could adopt this technology. Cameras would capture ocean views that the new towers would obstruct from current residents and relay the views to the other side of the building, thereby restoring the stolen view planes.

No, I’m not serious.

What is really needed is a way to make the HCDA disappear, then we won’t need to worry about the skyscrapers at all.