"Some of Hawaii's mentally ill homeless individuals became ineligible for case-management and housing services," he said. "If they had depression, PTSD or drug-induced problems, it wasn't covered. Only the most severely impaired got help."

Scott Wall, vice president for the Community Alliance For Mental Health, said that's when Hawaii went from running one of the nation's best behavioral health systems to one of the worst.

The use of the passive voice erases responsibility for an action:

A better way to say this would be to emphasize the fact that the state denied these individuals case management services. The state’s denial of services comes with consequences—and they knew it.

For those not familiar with these services, Assertive Community Treatment teams might visit a client every so often, up to once a day if necessary, to help them become regular in taking medication and to help them with other issues necessary to maintain good health. Cutting off these and other services abruptly has predictable and dire consequences—but they were cut nevertheless.

Similarly, eliminating or cutting case management hours to a tenth of the recommended hours cannot lead to anything but deterioration. 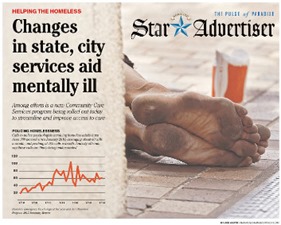 The headline of the lead story in today’s Star-Advertiser is misleading. It could better have been worded, “State cutbacks in mental health services lead to deaths and more homeless in need of treatment.”

That’s not what they printed, and the article’s positive tone is completely out of touch with the reality and consequences of state mental health service cutbacks in Hawaii.

An agitated homeless man barreled down Seaside Avenue in Waikiki on Thursday, hurling obscenities at passers-by.

Scenes like this have become common for the many tourists, residents and workers in the area.

How easily the reporter slips into treating Honolulu’s houseless citizens as pests (thank you Paola for your perceptive tweet: “They talk about it like it’s pest control”).

The fact remains that state and city cuts to budgets, staff and services resulted in measurable consequences, of which an increase of those with mental health issues on the streets would be only one. More consequential is that state decisions have resulted in deaths. Backing off in state service cuts in the future would be helpful, of course, but the response of the city—most notably closing off access to areas other than sidewalks and then confiscating property in day- or night-time raids—cannot by any stretch of the imagination be described as assisting the homeless whether they experience mental issues or not.

A measureable and significant increase in avoidable deaths was reported in testimony given [at an] informational briefing on state administration cutbacks in adult mental health services on Tuesday, March 16, 2010. This briefing was an opportunity for the public to give testimony, following previous briefings by the administration.

The first testimony was taken under oath, and after just a few minutes the news came out—a 36% increase in deaths 2009 over 2008 has been recorded.

These avoidable deaths can be attributed to cutbacks in state services to adult mental health patients.
…
Unless something is done, predictably, more people will die because of these service cuts.

The link includes a video of the sworn testimony that ends with the blank stares of legislators. Nothing was done as a result of the report.

Today’s article notes that the lifespan of those living on the streets is between 42 and 52 years, and that the mortality rate of young women living on the street is 4 to 31 times great than those who are housed (citing a 2005 source). If the state has denied treatment and forced people onto the streets, then it is directly responsible for the deaths it has caused.

As the state began cutting back on Clubhouse services, it denied mental health consumers one of the most effective programs that was operating. This blog undertook a (successful) campaign to save the Molokai Clubhouse, which was about the only place left on that island delivering state mental health services (see: The Lingle who stole Christmas, 12/28/2009). Later, clubhouses started turning away consumers verbally. Some consumers reported that they were turned away for “having the wrong insurance.” Turning them away verbally meant there was no record and no recourse.

Undoubtedly, for those who depended on Clubhouse assistance to help stay consistent with medication, the abrupt and heartless cutoff of services resulted in homelessness and deaths.

Other points the reporter missed:

Adult Mental Health Division Administrator Mark Fridovich said the state hospital houses about 240 patients, each costing about $250,000 annually and comprising a third of his total budget.

The reporter failed to note that the HSH, at 240 patients, exceeds its licensed capacity of 202 beds, as stated in a Department of Health report dated October 2012. The overcrowding at the HSH is one aspect of the state’s continuing neglect and could bring down the wrath of the feds once again.

The article also doesn’t associate the increase in emergency room admissions or police arrests as an indication of state failure, and it should—the evidence is glaring. In truth, the police arrests have little statistical meaning. For example:

This could mean that police find it easier to arrest apparently ill homeless people than to chase speeders or stake out intersections for red-light runners, for example. I have noted police reluctance to work on property crimes as well, beyond simply taking down a report. So that 44 percent means little.

Of course, any improvement in services would be very welcome. At the same time, a newspaper article should not whitewash responsibility for the deaths and suffering that state cutbacks and city inaction have directly caused.