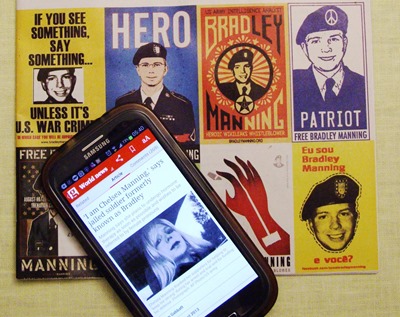 The Star-Advertiser hadn’t yet arrived at my doorstop as usual early this morning, so I sat down to read some of The Nation, which finally came by snail the other day, and to check the Guardian app on my phone.

The Nation’s cover celebrates one Bradley Manning, and The Guardian has a newer version:

I have no idea how the newspaper will eventually cover this story—it certainly won’t be “disappeared.” What is worth noting is the respect with which the Guardian story was written. For one thing, it used the female pronoun throughout.

In a statement on Thursday Manning said she would like to be known as Chelsea E Manning and be referred to by female pronouns.

"As I transition into this next phase of my life, I want everyone to know the real me," she wrote.

"I am Chelsea Manning. I am a female. Given the way that I feel, and have felt since childhood, I want to begin hormone therapy as soon as possible. I hope that you will support me in this transition."

The Guardian did support her. I doubt Fox News will be as generous. As to Chelsea’s chances of gaining support for her transition from her US military jailors, that’s going to be the subject of news in the future.

[Manning's lawyer, David] Coombs has confirmed that Manning will spend her sentence at Fort Leavenworth military prison, however a spokeswoman for the prison said this week that treatment for inmates at the prison does not include hormone therapy.

The tweetosphere has already switched to “Chelsea.” Some tweets point out that letters sent to her at the prison will have to be addressed as “Bradley” on the envelope or they won’t get delivered.

Neither the Guardian nor this morning’s Democracy Now sensationalized Manning’s announcement. I didn’t see the article on the Guardian’s home page and had to search for it. Democracy Now reported the sentencing and ran a clip of his lawyer’s statement and request to Obama for a pardon before  mentioning that Manning is now Chelsea.

The newspaper finally arrived “kerthunk” outside my door. After shucking the ads, I found it did have an article reporting that Bradley Manning was sentenced to 35 years. Given the speed that news travels on the Internet, that report seems so old.