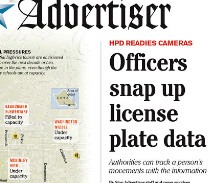 Today’s paper has another of those mystery headlines on the front page. This one not only fails to enlighten, but appears to be incorrect.

The story is based on an ACLU news release and information posted on their website—see Police Documents on License Plate Scanners Reveal Mass Tracking (ACLU, 7/17/2013).

The assumption is that the paper is referring to Honolulu police, or perhaps some other un-named county police authority. The story contradicts, however, reporting that “Honolulu police plan to get on the nationwide bandwagon.”

This also is not correct. Did the editors misplace their reading glasses? I saw the same ACLU information that they did. It says something quite different. Honolulu police have been on the “bandwagon” since at least February 2012, as they responded in an ACLU information request. Unfortunately (?), like many things not maintained in this town, the system is currently broken. From the HPD response to the Hawaii ACLU:

From 2002 through 2008, the Honolulu Police Department was not utilizing an ALPR [Automated License Plate Recognition] system. In 2008, the Honolulu Police Department received an ALPR through a grant, but it was never utilized. In February 2012, we started utilizing the ALPR. License plate information was obtained from our stolen vehicle database which was loaded into the system daily using a thumb drive. However, after three months, the ALPR was damaged beyond repair. We are attempting to obtain a grant to purchase another system.

The documents related to Hawaii are on this page. A downloadable report is available from the ACLU website here.

Hawaii County and Kauai police responded that they do not use ALPR technology and do not store license plate data. There is no response listed on the ACLU page for Maui County.

Opportunity for abuse of license plate data is exceptionally high

A not uncommon response to revelations that the NSA has been collecting phone and Internet data is “I have done nothing wrong, why should I care?” License plate data is very different. When collected, it shows where you have been, with whom and for how long, and is easily subject to a variety of abuses. The information is collected, stored and reviewed locally, where application of the rule of law may be spotty.

The story omitted the biggest concern that motorists may have: the use of license plate readers to routinely monitor travel time and hence speed on the highways. And indeed, there are such plans—the ACLU information included a State RFP issued in 2009 for cameras and computers capable of reading license plates on vehicles traveling in either direction on a highway and then calculating travel time for each one. The equipment would also be made available to the counties.

If you know that a car entered the highway at the Pali entrance, for example, and got off at Aiea, given the two times, you can calculate the average speed of travel. If that comes out, say, 60 mph, then it’s clear that the vehicle was exceeding the speed limit. Gotcha! Your ticket is in the mail.

The RFP does not detail this use, but it is only an RFP for the purchase of equipment and does not discuss intent or policy.

Speeders showed up at the Legislature in large numbers in 2002 to oppose the ill-fated “Van Cam” after its deployment in Honolulu, resulting in the rapid defeat of the program and removal of the camera vans from the highways. The planned state system is a magnitude more efficient than a few fixed speed trap cameras. It transforms the entire highway system into one humongous speed trap.

It knows if you were naughty or nice

It’s still possible to fake out Santa Claus on relative naughtiness, but license plate tracking systems produce data so personal and so subject to abuse that Santa would blush if he could peek at the data.

From the ACLU document You are Being Tracked (pdf):

As the U.S. Court of Appeals for the D.C. Circuit explained in a recent GPS tracking case

A person who knows all of another’s travels can deduce whether he is a weekly church goer, a heavy drinker, a regular at the gym, an unfaithful husband, an outpatient receiving medical treatment, an associate of particular individuals or political groups — and not just one such fact about a person, but all such facts.

In a jurisdiction where a citizen has the right to request copies of personal data from the government, tracking data for the family car can reveal exactly where spousie dear has really been when he/she was supposedly working late at the office.

Yes, license plate tracking data can reveal who slept with whom, when, and how often. The ACLU offers this hypothetical description of how that data may be abused:

The mayor of a medium-sized Midwest city is attempting to fight off the first major challenge to his position in over 20 years, and hears a rumor that his challenger has a mistress. He asks his police commissioner to analyze historical license plate reader data for his challenger’s license plate, and is able to confirm that he regularly visits the home of a young, single woman after 10 p.m. The mayor anonymously tips off a local journalist, who confirms the affair and publishes a front-page story exposing it.

In another hypothetical, the ACLU describes how tracking data can be used to subvert freedom of the press by identifying where a reporter has gone and with whom he has visited. The example describes a police whistleblower fired on a technicality after his car is discovered visiting a newspaper office.

This last example is not hypothetical:

Hawaii is one of a handful of states that has a strong right of privacy guaranteed by its state constitution. It’s not clear whether this would apply to a comprehensive license plate tracking system.

Here are the sections relating to privacy. I have added my own emphasis:

Section 6: Right To Privacy
The right of the people to privacy is recognized and shall not be infringed without the showing of a compelling state interest. The legislature shall take affirmative steps to implement this right. [Add Const Con 1978 and election Nov 7, 1978]

Section 7: Searches, Seizures and Invasion of Privacy
The right of the people to be secure in their persons, houses, papers and effects against unreasonable searches, seizures and invasions of privacy shall not be violated; and no warrants shall issue but upon probable cause, supported by oath or affirmation, and particularly describing the place to be searched and the persons or things to be seized or the communications sought to be intercepted. [Am Const Con 1968 and election Nov 5, 1968; ren and am Const Con 1978 and election Nov 7, 1978]

In 1978 neither NSA surveillance nor license plate tracking were anticipated, so it may be up to the Legislature to deal with privacy issues surrounding use of modern technology to build dossiers on innocent citizens.