Since the NSA leaks began, I found myself reading the Guardian and other overseas press websites more and more. The Guardian and reporter Glenn Greenwald have been the prime conveyers of leaks and analysis, while other countries have followed with their own news and commentary.

Reaction in the foreign press has usually been critical. But how should foreigners react when confronted with revelations such this one, last month:

An intelligence source with extensive knowledge of the National Security Agency's systems told the Guardian the US complaints again China were hypocritical, because America had participated in offensive cyber operations and widespread hacking – breaking into foreign computer systems to mine information.

Provided anonymity to speak critically about classified practices, the source said: "We hack everyone everywhere. We like to make a distinction between us and the others. But we are in almost every country in the world."

It is interesting to see that there is a distinction made between Americans, the people, and America, the government. Perhaps the best example I’ve seen is the image in this tweet: 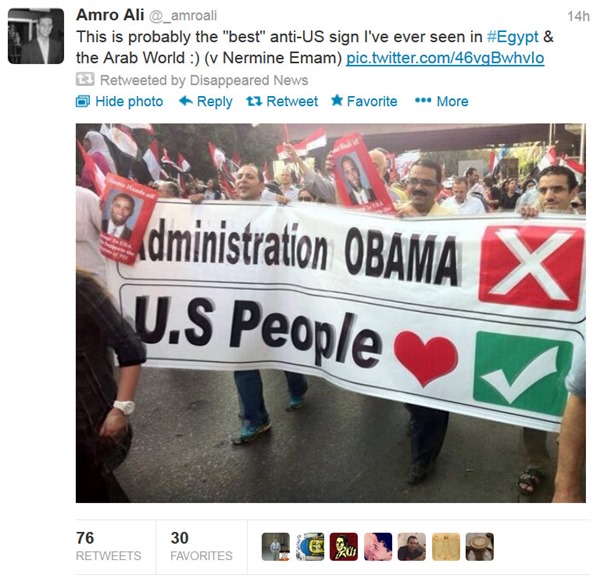 The world sees us  through news articles that never see print in this country. Much of the negative regard is directed at President Obama, but with the NSA scandal expanding to include massive spying in Europe, Brazil and elsewhere, the dislike goes beyond the actions of one man. Still, Obama is not escaping the strongest condemnation:

President Barack Obama's foreign fan club is finally realizing he is not the liberal hero they thought he was, The Financial Times said in a scathing article on Tuesday. If he were a white Republican rather than a black Democrat the same people would be "bitterly denouncing him."

"As Hakan Altinay, a Turkish academic, complained to me last week: "Obama talks like the president of the American Civil Liberties Union, but he acts like Dick Cheney," chief foreign affairs commentator Gideon Rachman wrote.

Drone strikes, the situation in Syria, and other aspects of US foreign policy certainly contribute to our country’s sinking regard overseas. And yes, it has been said that foreign governments have long assumed that we were spying on them, so the NSA revelations should not have been unexpected. But to the average European or South American citizen, we have been so busted.

Surveys from different parts of the world show the initial goodwill toward the U.S. from the international community after Obama assumed office has waned and recent headlines point to some reasons why -- Revelations of U.S. international surveillance, the manhunt of information leaker Edward Snowden, drone strikes in foreign countries and the continued unrest in Syria have exposed the traditional fault lines of international relations.

Most recently the world witnessed the “kidnapping” of the Bolivian president’s airplane, which was forced down in Vienna apparently as a result of US pressure on several European governments not to allow overflights of their country—to prevent the escape from Russia of Edward Snowden, who was not even on the airplane. This act was felt most strongly in South America, of course.

In its eagerness to capture the fugitive leaker Edward Snowden, the Obama administration has taken a step that will resound through Latin American history.

Add to that the most recent revelation that the NSA is massively collecting the communications of millions of citizens of Brazil, none of whom are a threat to the USA. See: The NSA's mass and indiscriminate spying on Brazilians (The Guardian (UK), 7/6/2013). See also the O Globo article EUA espionaram milhões de e-mails e ligações de brasileiros, or, via Google Translate, U.S. spied on millions of e-mails and calls of Brazilians, 7/6/2013).

But America’s image has been hurt also by reports of ongoing torture even as Obama claims he has ended it, unchecked gun violence, and sexual attacks not only in the military (26,000 estimated for last year alone), but among civilians even as the US condemns sexual violence in other countries such as India. Yes, these things can be found in the foreign press, even in tweets.

It’s likely, since the commercial press doesn’t cover it, that average Americans are not aware of the ongoing torture or inhumane conditions imposed by various sectors of its government even on those not yet charged or not yet convicted of any crime. These things are known overseas, however.

Following his well-publicized arrest, former New England Patriots star Aaron Hernandez is now living in a much less public place. Hernandez was recently placed into "protective custody" —one of the many names for solitary confinement.

Regardless of what you think of Aaron Hernandez, it's important to take a minute and remember he has not yet been convicted — in the eyes of the law, he is still innocent until proven guilty. But, while awaiting trial, he has been locked alone in a small room with little or no human interaction for over 20 hours a day.

Sadly, what's happening to Hernandez is not a rarity in our criminal justice system. There are more than 80,000 prisoners in solitary confinement across the country. They remain isolated for weeks and sometimes years on end, often without the press attention Hernandez's case has gotten.

The horrible conditions Bradley Mannings was subjected to, before he was charged with any crime, did gain public attention here as well as overseas:

After Manning’s arrest on May 29, 2010, he was transferred to a Marine brig in Quantico, Virginia, where, during his nine-month stay, he was reportedly held in solitary confinement for 23 hours a day, forced to sleep naked without pillows and sheets on his bed, and restricted from physical recreation or access to television or newspapers even during his one daily hour of freedom from his cell, all under the pretense that the private was a suicide risk. Manning’s treatment while in prison sparked as intense a public outcry as his arrest itself—drawing comparisons to the conditions of suspected terrorists at Guantánamo Bay.

Speaking of Guantanamo, which despite his rhetoric and promises, President Obama has done next to nothing to shut down, the torture continues even though the eyes of the world are watching. In addition to the force feeding of hunger strikers, the Guardian has reported:

Detainees inside the US camp at Guantánamo Bay are being exposed to increasingly brutal sleep deprivation techniques with doors outside inmates' cells allegedly being slammed by guards up to 300 times a night.

The same article details the preparations that the US is making to avoid torturing prisoners during the daytime fast of Ramadan. Instead, they will torture them only after sunset:

US authorities have claimed that they intend to force-feed only during the night in order to avoid breaking the daytime fast which is the central feature of Ramadan.

However they have yet to say how they will implement night feeding amid concern that the prison may become "a veritable force-feeding factory" during the religious period.

Lawyers for detainees say that dozens of restraint chairs and hundreds of staff might be needed to carry out the force-feeding of 45 inmates in the 10 hours between sunset and sunrise, with each person requiring an hour of feeding time and four hours of total observation time.

Military doctors who supervise the force-feeding of prisoners have been asked by their colleagues to stop their assistance:

Wednesday’s article [in the prestigious New England Journal of Medicine], “Guantanamo Bay: A Medical Ethics–free Zone?” argues that doctors who participate in the force-feeding of prisoners violate their ethical obligations.

“Force-feeding a competent person is not the practice of medicine; it is aggravated assault,” says the article, invoking the World Medical Association position that a competent prisoner can choose to hunger strike.

Let’s be clear: painfully forcing large tubes down the nostrils of each prisoner in turn (without cleaning the bloody tube in between), keeping them shackled to a chair for hours afterward to prevent vomiting, is torture. But it’s not just the force feeding. Here is another foreign-source report you’re unlikely to read in your daily newspaper:

… there are also at the same time extremely invasive searches going on of the genitals, of the anus and the searches of the Korans of the prisoners who are Muslims. And this has very serious implications in terms of their integrity as human beings with the capacity for intimacy, as a religious being and certainly there will be permanent psychological damage from that type of severe trauma.

There’s no way our country looks good with all of this going on. It’s reported overseas if not in our domestic commercial press.

In a way, police brutality directed against peaceful demonstrators is an extension of the same mindset. Both torture and police brutality require an abrogation of any empathy or compassion. Sadly, our system of justice provides no penalty for those who commit torture or who commit police brutality. The doctors and others at Guantanamo are not deterred from their actions. Police in one city after another commit violence against both men and women who pose no threat to the police or to anyone else. In the end, the victims may receive compensation, but the taxpayers whose pockets have been picked to pay it never hold their government accountable.

Victims of excessive police force at one of the most violent flashpoints of the Occupy protests have received a $1m compensation settlement.

The US district court in San Francisco made the award to a group of 12 protesters who complained of brutality during in confrontations with police in Oakland, California, in 2011.

Who paid the settlement? The taxpayers of Oakland, of course, not the individual police who beat the protestors or who injured them by (for example) shooting bean bag weapons at the groin of one of them, or by throwing explosives directly at another, resulting in permanent hearing loss. Nor will anyone be held responsible for the treatment of those detained by the city:

Anderson was held for about 15 hours in a cell with 40 other women and one toilet. "It was so crowded we had to take turns sitting down," she said.

I cited articles in the Guardian to illustrate that the world knows about these things, even if the average American TV viewer or newspaper reader remains uninformed.

The term “ugly American” was a pejorative term used to refer to the arrogant behavior of Americans traveling abroad, but how long will foreigners keep drawing a distinction between average Americans and the American government?  So far, there has been no movement to make our government change its ways. Ultimately, then, we are giving our assent to its illegal acts.

The irony is that we are alienating so many people to make ourselves "safer". Somehow that strategy seems ill conceived. To be safer we need the cooperation and good will of the world, not it's animosity.