When Max Kelly, the chief security officer for Facebook, left the social media company in 2010, he did not go to Google, Twitter or a similar Silicon Valley concern. Instead the man who was responsible for protecting the personal information of Facebook’s more than one billion users from outside attacks went to work for another giant institution that manages and analyzes large pools of data: the National Security Agency.

The article mentions that Silicon Valley companies and the NSA are

… now in the same business. Both hunt for ways to collect, analyze and exploit large pools of data about millions of Americans.

The only difference is that the N.S.A. does it for intelligence, and Silicon Valley does it to make money. 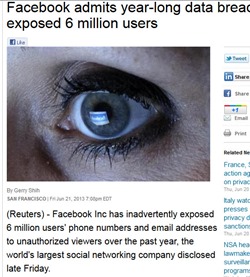 Yes, a massive data leak by Facebook has been discovered.

There’s more information on the leak in this ZDNet article:

The personal information leaked by the bug is information that had not been given to Facebook by the users - it is data Facebook has been compiling on its users behind closed doors, without their consent.

A growing number of Facebook users are furious and demand to know who saw private information they had expressly not given to Facebook.
…
Looking at comments on Facebook's blog and community websites such as Hacker News, Facebook users are extremely angry that the phone numbers and email addresses that are not-for-sharing have been gathered and saved (and now accidentally shared) by Facebook.

Anger is one thing, but action is another. Since nothing will be done to protect citizens’ right to privacy, we’ll just have to wait and see what the next atrocity is.

I wonder how many users will resign from Facebook? Probably relatively few, and most of those will probably rejoin after a while. For those who do quit - will Facebook retain their data? I'd guess yes.

So we cluck our tongues at the loss of privacy, then shrug our shoulders because, after all, what can we do? Is it possible to live off the grid? In theory it might be but in practice - we want the benefits of modern technology. So we voluntarily turn over the intimate details of our lives to Facebook (and Google, and Twitter...).

I actually don't have a Facebook account. Now, however, I wonder if they have a file on me based on my interactions with Facebook users via email or Twitter. And will this comment raise a red flag with Facebook and their good friends at the NSA? Am I paranoid? Yes. And even paranoiacs sometimes get it right.