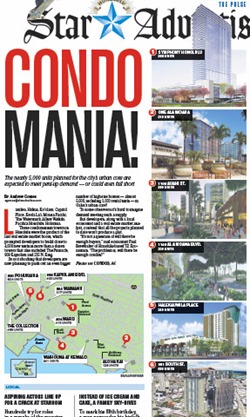 Look at it this way. Both the city and state fall into an ecstatic condition (as does our last standing Oahu daily paper) whenever a developer announces the planned erection of a new skyscraper or two or three.

Or maybe it’s a Freudian thing… (?). Truly, the front page of today’s paper looks like a wet dream for a whole lot of (predominantly male) developers, politicians, and editors.

Continuing on this tack, what they are disparaging is the land, the aina, Gaiia (the earth personified as a goddess).

Either way—manic delusion or Freudian exploitation—there is good reason to search for an effective therapy that can save Oahu from the inevitable consequences of either condition.

Those condos are not for us

Which of us has up to $1.9 million for these pricey digs? No, they’re not for us.

Sure, they’ll include a small percentage of “affordable” units, but Honolulu doesn’t have a regulatory regime to maintain a base of truly affordable housing.

Referring to One Ala Moana:

About 400 prospective buyers lined up in December for half those units made available publicly, while much of the other half was sold in Japan.

Here’s some of what those second-home buyers in Japan and the Mainland did not have to contend with that we do:

In short, it’s a tough life here in “Paradise.” The “demand” for this expensive housing does not come from the average person living here, too much of it comes from outside. It’s not for us, it’s for those moneyed outsiders. An economist said so, don’t think I’m making this up.

Condo mania will destroy what we love about Hawaii

At least, after work and on weekends and holidays, we can escape to the beach or to the parks to enjoy the benefits of the best climate on the planet. Our recreation, relaxation and joy come from the ability to get out and surf, or maybe to drive to the North Shore to escape the hot, mean city.

But now we learn that our government is mentally ill, and by approving developer’s endless plans to convert Oahu into a concrete jungle, they will allow the highways to become even more crowded, take away our open spaces, pollute our waters with even more sewage, drive up our energy costs, and ultimately, when tourists begin to notice and no longer come here, threaten our economy.

Today’s front page describes a drastic transformation of Honolulu’s urban spaces that threatens what is good about living here. Nowhere does it say that this grandiose remaking of our city has been approved by the people who will bear the negative consequences.

“Condo Mania” describes a condition that should be treated before it becomes harmful to self or others. Thanks to the Star-Advertiser for that headline. Now: what’s the therapy appropriate to the disease?

The degradation of our environment is of little concern to developers and state and city government, who point to a “demand” for housing that needs to be “satisfied.”

5,000 new units in Kakaako means thousands of toilet flushes sometime around 7 a.m. each day. None of that effluent will undergo secondary treatment (the City has until 2035 to upgrade the Sand Island treatment plant). It will simply be dumped into the ocean offshore as the day goes on.

In 2007, the EPA denied Honolulu's request for waivers, saying sewage discharged into the ocean posed threats to marine life and humans eating fish.

[from an undated article in Civil Beat, Honolulu Infrastructure]

The costs for updating Honolulu’s sewage system are expected to be huge, and of course, born by all off us, not just the residents of those 5,000 new condo units.

What about our ability to drive to work or to escape to the shore? Can the number of cars in Honolulu be limited? I don’t know, but I was reminded over breakfast this morning that when we lived in Tokyo, we were required to bring proof of a parking space for our car in order to have it registered, and that police would visit to verify the availability of that parking space and check that it was large enough for the car. That was one way the number of cars was limited there.

That works for Tokyo—perhaps there is something that could be done so that Honolulu can reduce the number of cars on the road (which may also discourage development, of course).

If not, those who need cars to get to work (the proposed train goes hardly anywhere) will find that the roads and highways are completely jammed.

That’s where we’re headed as long as unlimited development is not checked. Outsiders produce the “demand” for the expensive housing, we bear the consequences.

Where will we put the garbage from 4,000 condos and then from 5,000 more? From the Civil Beat article:

Oahu generates about 1.8 million tons of trash a year, more than can be contained by the island's two landfills.

I doubt the condo residents will be much into composting.

What they throw down the trash chutes from 750 feet up (the mind boggles) will simply add to our problems.

As to water, I can’t find a reference to the impact that thousands of new household will have, either on the system or on our pocketbooks. Perhaps there is something out there. We need to know.

Among the many parts of the HCDA "plan" that has me shaking my head is this: while adding all the new residents with all the new cars, the number of parking spaces provided in each of the condos goes down. The theory being that rail obviates the need for cars. Haha. What this means is that more and more cars will be searching for street parking, which is also reduced due to new street designs. So where do you park in the new Kakaako? I guess the answer is the development of giant garages with monthly rentals. But wait....isn't that the opposite of what we want to achieve?


Larry, I'm afraid you a misguided when you say "Our recreation, relaxation and joy come from the ability to get out and surf, or maybe to drive to the North Shore to escape the hot, mean city" and then condemn building vertical within the urban boundary. The idea of going denser and vertical is to save most of the North Shore, Windward and East Honolulu areas from this type of development. The only thing I hear from people who are against rail and against T.O.D.'s along the rail route is Hawaii needs to stop population growth and ban more cars. The missing piece of the puzzle is HOW? City planners are planning for population growth, the need for more housing and a more efficient way of getting people here to there without having to drive a car. All this while the anti rail and anti growth crowd sits around and complains. I urge all who care to get involved in the planning process.

To Anonymous: Yup, condo folks want to shop at Costco also, The train doesn't go there, and bus connections are not good either, nor can one carry home anything substantial on a bus. So they will have cars.

To Old Diver: Who says the North Shore won't be developed? First they came for Kakaako, then they came for...

I mentioned how Tokyo limits the number of cars, not because the same might work here but to illustrate that it's not necessarily futile to think about how that might be done.

As to whether Hawaii needs to limit population growth, I firmly believe that must also be weighed. Hong Kong is a great example of the consequences (and might be an illustration of what the North Shore will look like when developers finish with it).

Another example from Tokyo: When we moved there in 1972 there was only one little department store in Kichijoji, where we lived, the Seiyu Department Store. It would hardly qualify by US standards, it was so small. By the mid '80s there were six, including branches of the largest depatos in Japan. In a way, Kichijoji, a quiet bedroom town with some great old drinking places, a popular park with a shrine on an island, was kind of like Oahu's North Shore. And then developers got hold of it. At this point it's really a smaller-scale Shibuya.

No, building upwards at Kakaako or the D.O.T. that lead to the rail plan, will not save the Country. It will only increase demand for more housing away from what Kakaako will have become.

Kailua is also in danger, though its residents may be protective of it. Kakaako isn't Kailua, and there are fewer voices that might object to what is planned for it.