“Freud considered shooting the messenger a 'marginal case of this kind of defense...of fending off what is distressing or unbearable' - citing the example of 'the famous lament of the Spanish Moors Ay de mi Alhama, which tells how King Boabdil received the news of the fall of his city of Alhama. He feels that this loss means the end of his rule. But he will not "let it be true"...."He threw the letters in the fire and killed the messenger."—Wikipedia

The Guardian series so far:

Of course, Congress, the White House, the FBI, the DOJ and who knows what other agencies, are scrambling to find the NSA whistleblower and do whatever it takes to shut down the stream of revelations that have attracted the world’s attention to the US surveillance state.

During the exclusive interview with [NBC News' Andrea] Mitchell, [Director of National Intelligence James] Clapper told NBC News that the NSA has filed a criminal report with the Justice Department requesting an investigation into the leaks to the Washington Post and the Guardian newspapers.

And no doubt Glenn Greenwald, who authored the series of reports (currently three, with more reportedly on the way), has at least temporarily replaced Julian Assange on President Obama’s “most wanted” journalist list. For sure, the government has been monitoring his phone calls, emails and whereabouts for some time, and if not, they are now.

Our daily newspaper outsources its national news, of course, and has chosen to run articles from the New York Times which have considerably less detail than what you might find in The Guardian or the Washington Post  Both apparently received the leaks directly. Poor New York Times, they were left out this time.

Astute readers of Disappeared News know that they can go directly to the Guardian website to view Greenwald’s installments and other commentary directly. The posted articles include several of the leaked documents which you can view on-line. 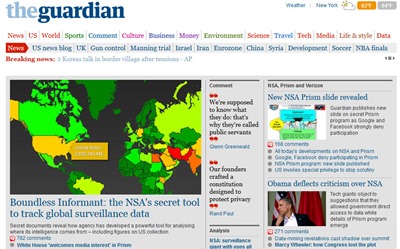 The latest in what is developing into a series of revelations is Boundless Informant: the NSA's secret tool to track global surveillance data (The Guardian (UK), 6/8/2013).

The paper posted a FAQ from the NSA that shows that the NSA is capable of collecting almost 3 billion pieces of intelligence from US computer networks over a 30-day period.

Perhaps President Obama’s insistence that “Nobody is listening to your telephone calls. That’s not what this program is about” indicates his defensiveness in the face of the flood of revelations. The extent of his administration’s intrusion into our communications, financial transactions, and more, has been laid bare.

Perhaps they are not actually listening into our conversations (or perhaps they are—why should we believe this president for a moment?), but they have intercepted and stored just about everything else. “Three billion pieces of intelligence” a month is a lot of intelligence, and the collection didn’t start just yesterday. Another number in the article:

…in March 2013 the agency collected 97bn pieces of intelligence from computer networks worldwide.

So if they’re not listening to our phone calls, it’s perhaps just because they’re too busy with all this other data that’s easier to search and classify.

But most likely they are listening to our phone calls. See the short Wikipedia article on the program code named Stellar Wind:

The program's activities involve data mining of a large database of the communications of American citizens, including e-mail communications, phone conversations, financial transactions, and Internet activity.

Every day, collection systems at the National Security Agency intercept and store 1.7 billion e-mails, phone calls and other types of communications.

Clearly, to conduct “speech analysis,” the government must have speech stored and waiting to be analyzed. Those speech recordings are the phone conversations that “nobody is listening to.” Sure, like President Clinton was not having sex with his intern. They don’t actually sit there with earphones, perhaps, the traditional way to “listen.”

Going back to the Stellar Wind article:

…the Stellar Wind cases were referred to by FBI agents as "pizza cases" because many seemingly suspicious cases turned out to be food takeout orders.

Yes, dear President, they’re even listening to our pizza orders.

The Washington Post clarifies that it is not just foreign emails and correspondence that is scrutinized, but also domestic. And I don’t know how much pizza is ordered in Afghanistan… one can only assume they were closely watching Brooklyn as well. If the FBI “pizza cases” report is true, then the President appears to be lying.

Readers may recall a case in 2006 (pdf) which revealed that the government was given free access to tap into AT&T’s fiber-optic lines. The access permitted calls to be recorded.

Here is Glenn Greenwald on the same subject: Are all telephone calls recorded and accessible to the US government? (The Guardian (UK), 5/4/2013).

Even as the ink is barely dry on the Guardian’s initial revelations, some backlash has already begun. While many in Congress are pushing for an investigation (if not an actual lynching) of the whistleblower, some in the press are beginning to check what part in this congressional leaders have played. And some of those leaders are scrambling to cover their roles in setting up the rubber-stamp FISA Court and the Patriot Act. For example,

To hide his role in championing the use of Section 215 of the USA Patriot Act to collect of Americans' phone data and other "tangible things", one of the architects of that legislation, Wisconsin Congressman Jim Sensenbrenner, edited a quote in a letter (pdf) to Attorney General Eric Holder Thursday to suggest he never knew how the FBI and NSA were using the authority his legislation had granted.

[The Guardian (UK), How the US Congress lost the plot on secrecy, surveillance and accountability: Outraged by the government dragnet of our private data? Blame the politicians who gave the Obama administration a free pass, 6/7/2013]

Here’s how the blame is coming down for Hawaii:

Sen Brian Schatz was joined by other progressive Hawai'i Congressional members. Both Daniel Akaka and Mazie Hirono have voted against the reauthorization of FISA.

But one Hawai'i House member was not bothered by potential Constitutional violations and problems with Americans' civil rights.

Slate has posted a page with a clickable blame map: Did Your Senator Vote to Expand the Government’s Spying Powers? (Slate, 6/8/2013).

For Hawaii it shows that both Senator Inouye and Senator Akaka voted “yes” on the 2001 Patriot Act.

Senator Akaka voted “no” on the Patriot Improvement and Reauthorization Act of 2005 while Senator Inouye did not vote.

Senator Akaka voted “no” on the FISA Amendments Act of 2008 while Senator Inouye voted “yes.”

Senator Akaka and Brian Schatz are listed as both voting “no” on the  FISA Amendments Act Reauthorization Act of 2012. (Were they both there at the time? I need to check…).

If a drone missile doesn’t get Glenn Greenwald over the weekend, the word is that there are more revelations to come.