How was the source of the ricin-laced letters sent to President Obama and Mayor Bloomberg found so quickly? Sit down, you’re not going to like this. 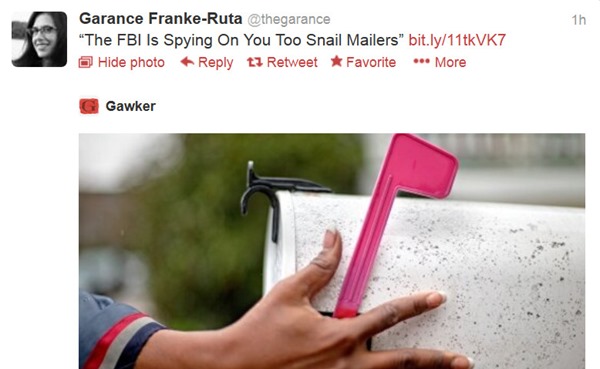 FBI agents were able to track the letters using a Postal Service program called "Mail Isolation Control and Tracking" that "photographs and captures an image of every mail piece that is processed" through the USPS. Using those images, investigators were able to determine that the letters were sent from the New Boston, TX area (where the couple lives) before being transported to Shreveport, LA for processing.

[Gawker.com, The FBI Is Spying On You Too Snail Mailers, So Maybe Don't Mail Ricin]

So if this article is accurate, then somewhere in the gargantuan government data cloud can be found not only your Gmail and your email but your snail mail as well. At least, the “meta-data” of that snail mail, to use a word that has suddenly entered the popular parlance.