Like cicadas, a plague of drones is said to be on the way


“The U.S. Federal Aviation Administration is developing regulations to open the country’s skies to drones by 2015. The agency estimates that 30,000 drones will be hovering above towns within seven years. The vast majority of U.S. drones will probably be used for agriculture, according to the AUVSI [Association for Unmanned Vehicle Systems International] report.”

Welcome to the brave new world of surveillance.

That buzz on your phone? Maybe the kid next door tapping your line. NSA spying doesn’t make a sound. 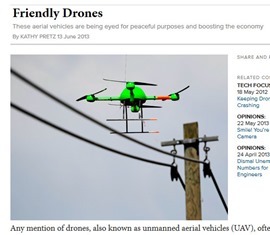 That buzz in the sky above you? Certainly not an agricultural drone if you live in town (the pull-quote above is ambiguous as to whether the ag drones are additional to the 30,000 town drones).

Maybe that flock of drones above you has come to observe your neighbor sunbathing on her roof. Drone bait.

As more drones take to the skies, they are expected to help the economy soar and with them will come engineering jobs. The global market for drones will grow to US $11.4 billion in 2022 from $6.6 billion this year, according to Teal Group Corp. of Fairfax, Va., which analyzes the industry. Several aerospace and defense companies, major employers of engineers, stand to gain from broad deployment of UAVs for commercial use.
…
But drones are not without controversy. Privacy advocates and those worried about government intrusion have often looked at drones with weary eyes. According to an article in The Guardian, concerns in Europe are growing that the drones could “have profound consequences for civil liberties."

The IEEE article is a good, short, kid-glove introduction to the coming plague of private, commercial and local government droning. But keep in mind that this is the organization that just turned its mail system over to Google, thereby potentially compromising its members’ message security. 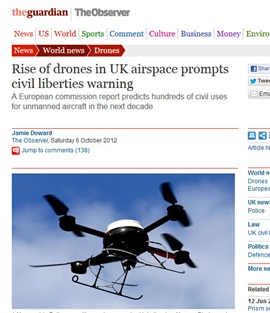 Here are some more links to Guardian articles on drones.

An information request related to drones was filed with the HPD, but the requester did not, apparently, take advantage of Hawaii’s UIPA laws requiring a timely response, and the website indicates no responsive documents were received over a considerable interval of time. 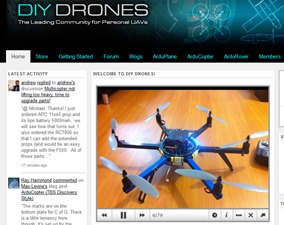 Be the first on your block to control the world: DIY Drones

I was just kidding. These folks are not: 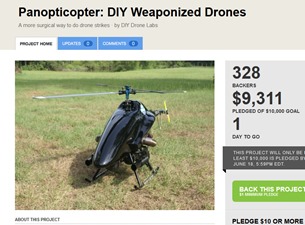 Our goal is to have a working prototype of the Panopticopter ready for testing by the end of summer. Can you help us get there?

For $1000 or more support, they’ll give you one of their drones fully assembled.
This work is licensed under a Creative Commons Attribution Non-commercial Share Alike license.