Latest: China upset that US is hacking it following latest Snowden interview


“Snowden also claimed that the US had been hacking Hong Kong and China since 2009. He [said] that the US had hacked hundreds of targets in Hong Kong – including public officials, a university, businesses and students in the city – and on the mainland. In his interview [with the South China Morning Post,], Snowden said he was releasing the information to demonstrate “the hypocrisy of the US government when it claims that it does not target civilian infrastructure, unlike its adversaries’ .”

Snowden is talking, and the world is listening. China was listening today, and the South China Morning Post, often used to decode government opinion, interviewed him and published a series of articles. A snip from the interview on their website:

“We hack network backbones – like huge internet routers, basically – that give us access to the communications of hundreds of thousands of computers without having to hack every single one,” he said.

“Last week the American government happily operated in the shadows with no respect for the consent of the governed, but no longer. Every level of society is demanding accountability and oversight.”

Snowden said he was releasing the information to demonstrate “the hypocrisy of the US government when it claims that it does not target civilian infrastructure, unlike its adversaries”.

“Not only does it do so, but it is so afraid of this being known that it is willing to use any means, such as diplomatic intimidation, to prevent this information from becoming public.”

I jokingly said in a previous article that Snowden had better beware of drones overhead. Great minds think alike. This is from the NSA spying segment of Monday’s Colbert Report: 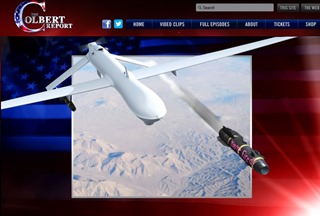 For sure, at least some in the US government must be wondering how to silence Snowden.

The Guardian has an Android app that offers breaking news. It’s one of the best all around, and does pay attention to events in the US. These days I find myself nervously tapping it every so often just to see what’s new in this ongoing story.