“The eventual amount paid for the construction of one individual field office was nearly $1 million, almost 30 times the amount we estimated it should have cost.”

cyn·i·cism  (sn-szm) n. 1. An attitude of scornful or jaded negativity, especially a general distrust of the integrity or professed motives of others: the public cynicism aroused by governmental scandals. 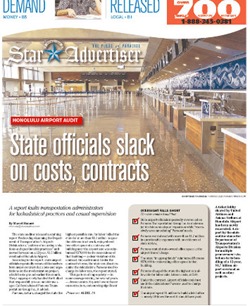 An auditor’s report of massive waste in the State Department of Transportation made the front page of today’s Star-Advertiser. 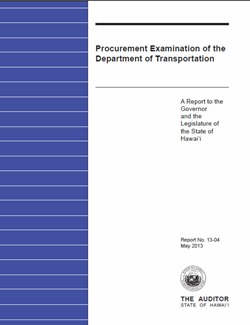 The audit report itself is good reading and is available here.

The report and story came out just as I was penning a short account of Friday’s community meeting on Thomas Square, which had a sub-theme of waste of taxpayer money and incompetent management of the park by the City.
On reading the Star-Advertiser story I was wondering a couple of things:

1) What is the responsibility of the Governor and department leaders for ensuring competent management and stewardship of taxpayer money?

2) Will heads roll? (Probable answer to this one: no, because waste of money is nothing unusual here, and performance standards are abysmally low.)

3) Is the supply of taxpayer money really so unlimited that both state and city governments can throw away so much of it without consequences?

4) Do they ever fix leaks in state or city toilets, or fix dripping faucets?

Here’s a little more from the page on which the above pull-quote was taken:

Airports is also unwilling or unable to properly administer and manage contracts that it oversees directly. Again, we found a persistent overreliance on and accommodation of contractors, which often resulted in cost over-runs, time delays, and procurement violations. For instance, Airports did not procure a new security contract in a timely manner, allowing the original contract to be extended three times, exceeding the original contract term limit by 16 months and $37.7 million. In addition, Airports failed to do a cost analysis for the construction of field offices for projects at the Hilo, Lihu'e, and Kahului airports. The eventual amount paid for the construction of one individual field office was nearly $1 million, almost 30 times the amount we estimated it should have cost.

Either “unwilling” or “unable” to “properly administer and manage contracts that it oversees directly” should be cause for an immediate overhaul in the Department of Transportation. Surely, there must be managers in Hawaii who are “willing” and “able” to do the job they are paid to do. So add in the salaries of the current bureaucrats to the bucket of waste that the state is tossing out.

And then there is this on subverting the public interest: 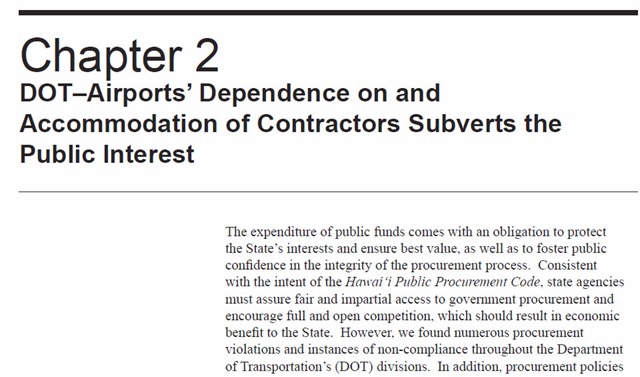 Here’s a snip from that section, with my emphasis added:

The expenditure of public funds comes with an obligation to protect the State’s interests and ensure best value, as well as to foster public confidence in the integrity of the procurement process. Consistent with the intent of the Hawai‘i Public Procurement Code, state agencies must assure fair and impartial access to government procurement and encourage full and open competition, which should result in economic benefi t to the State. However, we found numerous procurement violations and instances of non-compliance throughout the Department of Transportation’s (DOT) divisions. In addition, procurement policies and procedures were not consistent among divisions, and a lack of procurement training and monitoring of compliance were department-wide concerns.

Especially troubling was the pattern of recurring violations and questionable practices we found in the Airports Division (Airports), which in fiscal years 2009 and 2010 accounted for approximately 30 percent of the department’s total procurements of $417 million of goods and $467 million of services. This pattern of impropriety—in some cases persisting for several years—demonstrates Airports’ overreliance on contractors, outsourcing significant decisionmaking responsibilities to them while excessively accommodating their needs. Compounding these significant deficiencies was Airports’ inability or unwillingness to properly plan, oversee contracts, and monitor the work performed under those contracts, resulting in excessive delays, increased costs, and numerous procurement violations.

I can tell you from my experience at General Electric, this would not have been allowed to happen in a private company, and if it somehow did, there would be a massive reaction to the failures.

But this is Hawaii, not GE. It’s just standard operating procedure. We can expect there will be another audit report like this one, then another, it just goes on and on.

We know that this is not the only instance of state failure to properly administer the public funds it has collected from each of us. Nor is the mismanagement limited to government alone. A case in point: the University of Hawaii repair backlog, described in the newspaper as a “stunning” $461 million.

If the President and leadership of UH is being held accountable for wasting money, shouldn’t our Governor be held to the same standard?

We know that the Department of Education has it’s own, perhaps equally “stunning,” repair backlog.

Which brings us to the condition of Thomas Square Park and the City’s willingness to waste money on raids and planters instead of grass seed. Ok, let’s leave that to the next article. In the meantime, have a look at that audit report, or the newspaper article if you have it.

No heads will roll because we have a new governor since this happened. Hopefully if criminal activity is found justice will be served.


It's certainly criminal in a colloquial sense.