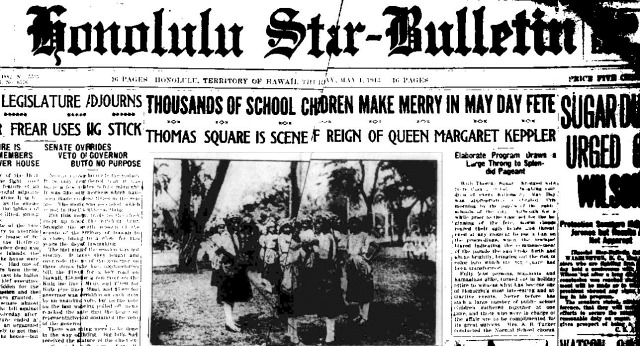 Lei Day was not invented by a Hawaiian. It was concocted by a socialite and poet in the newsroom of the conservative Honolulu Star-Bulletin, according to the Wikipedia:

On May 1 each year, Hawaiians celebrate "Lei Day," first conceived in 1927 by poet Don Blanding. At the time, Blanding was employed by the Honolulu Star Bulletin, and he shared his idea with columnist Grace Tower Warren, who came up the phrase, "May Day is Lei Day". The Hawaiian song, "May Day is Lei Day in Hawaii" was composed in 1927 by Ruth and Leonard "Red" Hawk.

Another Wikipedia article points out that the song was not really Hawaiian, it was originally a fox trot.

According to the Star-Bulletin of 1913, a hundred years ago May Day was celebrated with pomp and pageantry similar to the present Lei Day, which probably made the substitution relatively easy.

There is, of course, a long tradition of positioning a new holiday on top of an older one, either to replace it, or to take advantage of the popularity of the pre-existing celebration. Christmas, for example, was positioned on top of the last day of the week-long Saturnalia festival. May Day itself was derived from the Celtic festival of Beltane and the Germanic festival of Walpurgis Night.

The newspaper front page above notes that “Thousands of school children make merry” in the May Day celebration 100 years ago today, and they even had a queen to reign over Thomas Square.

Most recently, May Day is celebrated as a labor holiday. Lei Day effectively supplants that.

And we do love pageants and the chance to get out in the warm sunshine and celebrate something.

Other places know how to put forth demonstrations and rallies. Here’s what one looks like in New York City. No doubt the alternate media will cover some of today’s May Day rallies, and as usual, the commercial press will prefer not to, though one could be surprised, I suppose.