“Jizo” are Japanese revered statues whose purpose is to protect the people. They are commonly seen in the countryside of Japan.  They are also seen in various places in Hawaii, especially near the sea. 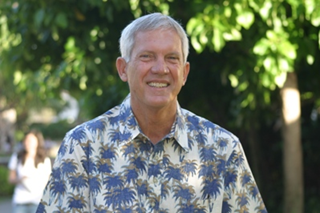 John R. Kukeakalani Clark is the author of Guardian of the Sea: Jizo in Hawaii. John closed an illustrious chapter of his life when he retired as Deputy Fire Chief of the Honolulu Fire Department. A 33- year veteran, he left a proud legacy and even coined the department’s motto, “Pride, Service, Dedication.” This true-blue firefighter is better known to most of the world as “Mr. Beach,” the author of a celebrated series of books on the beaches of Hawai‘i. 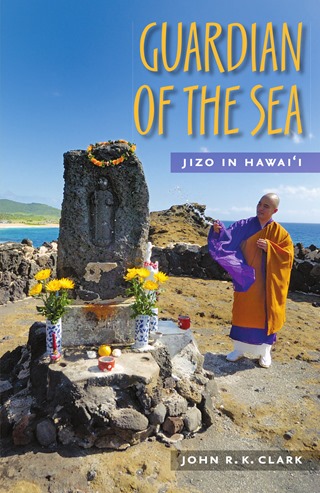 More on John Clark, snipped from the introduction to his book:

In 1970 I became a lifeguard with the City and County of Honolulu. During my two-year career with the lifeguard service, I was stationed at Sandy Beach, where my partner Daryl Picadura and I made many rescues, pulling visitors, military personnel, and local residents out of Sandy’s pounding shorebreak. In the spring of 1972 I decided to write a beach guide for the island of O‘ahu that would list every beach on the island and identify its dangers, physical characteristics, recreational uses, and value as a historic and cultural site. When I joined the Honolulu Fire Department in the summer of 1972, I kept writing. The Beaches of O‘ahu, the first in a series of books about the beaches of Hawai‘i, was published by the University of Hawai‘I Press in 1977.
…
The stories of these statues of Jizo are part of a much larger story — the history of the early Japanese immigrants in Hawai‘i. For many of them, Jizo was an everyday part of their lives in Japan, and through the history of the statues we see what life was like during the fi rst half of the twentieth century for the issei, the Japanese immigrants in Hawai‘i, and for their children, the nisei. We get a glimpse of their everyday activities in the plantation camps and in the cities, including their funerals and other religious ceremonies. We see the impact of the bombing of Pearl Harbor and the results of the anti-Japanese hysteria that followed, including the internment of many Japanese in Hawai‘i for the duration of World War II. And through it all, we see the strength of Buddhism in Hawai‘i, one of the powerful guiding forces that sustained the early Japanese immigrants through the challenges of assimilation in another country, a force that continues to guide their descendants today.