“The court, having concluded this five-week trial from 8/4/09 through 9/11/09 and having considered the trial evidence and arguments of counsel, determines that Plaintiffs proved by clear and convincing evidence breaches of trust by the Defendant State of Hawai'i ("State") and Defendant Department of Hawaiian Home Lands ("DHHL") during the claims period (August 21, 1959, statehood, through 1988) and that said breaches were a substantial factor or legal cause of eligible Native Hawaiians not being placed on the land in further breach of trust obligations as alleged in the waiting list subclass bifurcated trial.”

An historic and hard-fought legal action capped by a five-week trial concluded in November 2009 that the State of Hawaii and the Department of Hawaiian Homelands breached their trust obligations to Native Hawaiian beneficiaries. The damages/compensation phase of the trial, Kalima vs. Hawaii, continues before a different judge. The most recent hearing was held on March 25, 2013.

The legal action was initiated in 1999. During its long course, the hair of the two plaintiff attorneys turned grey, and class members have passed away waiting for its conclusion. The judge who issued the decision has retired. Apparently, the concept of speedy justice does not apply to Native Hawaiians in Hawaii. 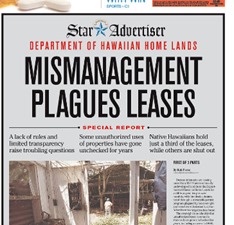 As the series of three articles appearing this week in the Star-Bulletin demonstrated, DHHL is still failing to fulfill its obligations to efficiently and expeditiously place beneficiaries on the land that is supposed to be theirs. Unfortunately, the articles are trapped behind the Star-Advertiser’s paywall. Also, the reporter did not address the liability that the State faces as a result of the Kalima trial nor the mismanagement of the trust that was uncovered and documented as the lawsuit advanced.

From a Disappeared News article in 2009:

The Hawaiian Homelands Trust is an obligation that Hawaii assumed as a condition of statehood. This trial covered a limited time period of 1959 (statehood) to 1988 and asked for compensation for losses resulting in delays in awarding homesteads.

The attorneys represented 2,700 beneficiaries, many of whom were young applicants but are now senior citizens. Over the 30 or more years since they may have applied for a homestead or for agricultural or pastoral land, some have passed away.

Members of the plaintiff class originally filed claims 1991 with an administrative panel charged with compensating them for their losses, but when that went nowhere and the state shut down the panel, the lawsuit was filed. It made it all the way to the Supreme Court, where the state argued that claims could not be brought against it.

The Supreme Court ruled that indeed claims could be brought, and sent it back down to the Circuit Court for trial. Judge Eden Elizabeth Hifo ruled yesterday that the state was liable for breaches of trust in failing to award homesteads promptly. 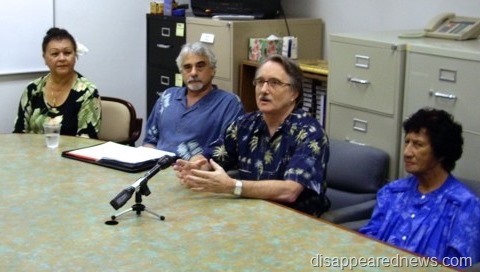 As a result of the decision by Judge Eden Elizabeth Hifo, the State will be required to pay compensation to the class beneficiaries. Hearings on the compensation model are currently underway before  Judge Virginia Crandall.

A detailed history of the case, including the current status of the compensation phase, is maintained by attorney Tom Grande here. The web pages include links to documents in the case. I’ve included Judge Hifo’s decision below—it could usefully have been included in the Star-Advertiser series and demonstrates that the incompetent leadership of DHHL is nothing new. For example:

Mr. Rodney Lau credibly testified that financial records of DHHL for the years June 1962 to 1972 were not available, clearly not auditable, and that period was not accounted for. ... "accounting system and internal controls . . . were wholly inadequate" for period July 1, 1962 to June 30, 1972;

NOW, THEREFORE, IT IS HEREBY ADJUDGED

That Plaintiffs have proven by clear and convincing evidence breaches of trust by Defendants State and DHHL during the claims period and that the individual and/or cumulative effects of such breaches caused by acts or omissions by employees of the State in the management and disposition of trust resources were a legal cause of harm to the Plaintiffs herein which are compensable as defined by Sections 674-1, -17 of Hawaii Revised Statutes, thus necessitating further proceedings to determine the amount of damages, if any, each subclass member proves s/he sustained as a result of the breaches during the claim period.

Sadly, class representatives have passed away as justice in this case plods slowly along. When the trial is ultimately concluded, the State will have a bill to pay. But as the newspaper series attests, the trials and tribulations of Native Hawaiian beneficiaries continue in the present.

The document below is an OCR copy and may contain errors. Do not rely on this copy.

Download Kalima vs. Hawaii 2009-11-03 Decision Re Liablity and Legal Causation-OCR from Disappeared News