Six years after the voters approved an amendment to the City Charter making it a priority for Honolulu to become a pedestrian-and bike-friendly city, the Council enacted a “complete streets” ordinance (Ord. 12-15). The ordinance requires that facilities and features that promote travel by pedestrians, bicyclists, transit riders, and persons using assisted mobility devices be considered whenever a road is constructed, reconstructed, or maintained by the city. 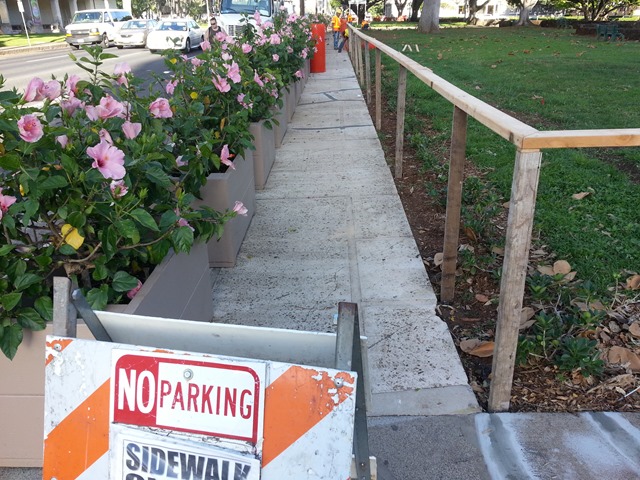 The ordinance clearly applies to sidewalks and to the planters that the City has installed along Beretania Street.

The ordinance states that one of its objectives is to:

Protect and promote accessibility and mobility for all

From the ordinance it is clear that sidewalks and plantings are covered:

The ordinance also describes solutions that would be determined by stakeholder involvement, but it’s not clear from reports and statements which, if any, stakeholders were consulted before the Beretania Street planters were installed. 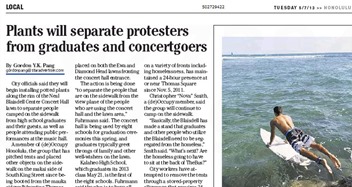 An article in yesterday’s Star-Advertiser reports that planters will be installed around the periphery of Blaisdell Concert Hall but does not specify whether they will be on the grass or on the sidewalk.

Severely restricting sidewalk width does not appear to be a viable solution to the City’s inability to deal with homelessness. It could also subject taxpayers to bearing the cost of liability settlements for anyone injured while trapped in one of the lengthy corridors who is hit by an oncoming bicycle or wheelchair or who falls or is pushed against one of the planters.

If bicyclists are forced into the busy street because they cannot use the sidewalk, not only are they subject to injury, but traffic on the streets will be restricted in order to allow bicyclists safe passage.

Afterthought: After posting this, it occurred to me that by blocking visibility and access, the planters may make it possible for all kinds of crimes to be committed behind them, and they also would block ambulances and first responders. 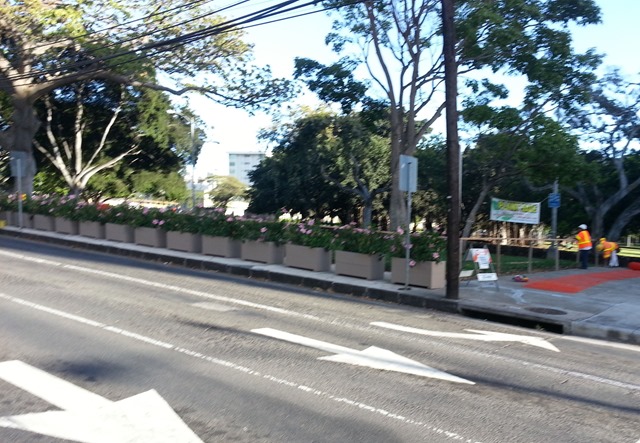 Can the names of those responsible be made public? A work order signed? Email verification? This is really a dumb idea!


I think it's reasonable to say that this could not have been done without the concurrence of the Mayor, so he is really the person responsible.


The Maginot Line of planters would make an absolutely wonderful art installation at the Academy's Spalding House (formerly the Contemporary Museum up in Makiki Heights) where the edgier art goes. They'd have to put the planters on risers in order to keep them all on the same plane, but what a cutting statement about the forced simulation of happiness it would be!


The planters look great - have seen wheelchairs navigate with no problems. The ordinance says "consider" and I feel certain all users of the sidewalk were considered. And of course sidewalks are not a place for tents - so it appears the Mayor and his team have done a quality job both on South BERETANIA and Sourh King.


The Maikiki Neighorhood Board who represents the Thomas Square Park Area was never consulted or informed about putting up planters to keep the homeless off the sidewalk. If the Mayor and City Council has a problem with this we could request to return the park to 24 hours use. That way the homeless will not have to sleep on the sidewalks
Sam Mitchell NB-10 349-4279