Which app for that? Best navigator--Waze

Those who were born with a smart phone in their cribs will have no trouble figuring out which of the zillion or so available apps work best for them. Whether it’s games, video, research, or cooking, they’re on top of it.

I waited for the Samsung Galaxy S3, so I’m a relative newbie. Still, my phone is already bursting with apps.

But are they the best ones? What are the latest hot apps?

Many apps are available for both Apple and Android platforms. Obviously, I’ve tried the Android version.

The slogan on the Waze website is “Outsmarting traffic together.” It’s one of only two crowdsourced navigation apps I’ve found so far (the other is Inrix).

During rush hour in Honolulu there could be hundreds of Wazers on the road (it tells you the number when you turn it on). Each phone, using very little data, reports back to the server. So just by running the app you are contributing to the traffic database. In addition, you can report collisions, lane blockages or even police presence with your voice if you choose to, and it will appear on the maps. So you’ll know about a blockage just seconds after it’s reported.

Waze displays the road speeds when things get jammed up, and doesn’t send anyone on that road unless that’s still the best alternative.

Otherwise, it’s mostly the same as other navigation apps. Oh—one more thing—Wazers initially made the maps for a city themselves, and continue to maintain them. For example, if Waze sees cars moving on a new road, it can figure out that it’s new, and also whether it’s one-way or two-way, etc. There are area map specialists who take care of glitches that may turn up. And a Wazer can learn to make simple map edits by following the instructions. For example, a new street needs someone to name it.

There’s a lot to like in this app: It will record where you park, you can speak your destination, it remembers your home and work locations, and so forth. It can help you meet up with others going to the same party.

I’ve been using Waze for several months now. It’s gotten me out of many jams and taught me some routes that I would never have thought of.

Just as an example, leaving Costco Iwilei one Friday afternoon at 4:20, I knew I was in big trouble. Normally I would take a right turn on Dillingham Blvd. and just wait, wait, wait for the line of cars to crawl forward to Vineyard Blvd., hopefully some time that same night.

But Waze directed me to make a left turn. A left turn? Why? I was already eyeing the traffic jam and I didn’t want to risk going farther away from my destination and taking even longer to get home. But I trust Waze, so I did as she asked.

As I retreated from town I noticed that the line of cars extended along Dillingham seemingly all the way to infinity, and nothing was moving. Nothing.

Either this was going to work, or I better change dinner plans. And the frozen food in the trunk would defrost.

Trusting Waze, I abandoned myself to her care and snickered to myself as I sped by those stalled cars with no traffic ahead of me at all. 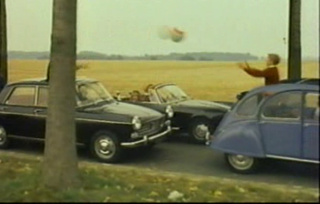 It reminded me of the scene in Jean-Luc Godard’s Weekend where the driver passes a long line of cars stuck on a French highway simply by driving in the opposite lane of traffic. Maybe you know that scene.

Anyway, my friendly and intelligent navigator asked me to take a right at Kokea St., just before the river. Aha, thought I, now snickering out loud. Kokea St. goes to that service road along the H-1 that becomes Vineyard Blvd.

There wasn’t a single car on Kokea St. except mine. Ha! Zoom!

Short story (and it really was short): I got home in just 7 minutes. Had I followed my usual habit and turned right on Dillingham, I think I’d still be there.

Waze had done that for me before—one day it sent me on a strange (but fast!) route to the highway from the KCC Farmers Market. I never would have thought of the route, but there were no cars ahead of me and now I would go that way again on my own.

Waze also learns your favorite routes if you prefer to go a certain way. You just drive it a couple of times.

About the only peculiar thing I’ve noticed is that it never asks me to make a U-turn. Instead it says to make a left and a left. Ok, I understand that now.

So try Waze. Traffic in this town is not going to get any better. Just by running it, you’re contributing. You’ll help me, I’ll help you.

Update: I played a little with Inrix. So far, I’m not fond of it. For full features, a paid upgrade is needed. And it showed a collision near where I was—the notice was posted one minute before I looked at it. I checked Waze, and the report had been posted 11 minutes earlier. There were additional reports that Inrix didn’t have on its map. I suppose each program has its advantages, but I’ll stick to Waze.
This work is licensed under a Creative Commons Attribution Non-commercial Share Alike license.

Are people entering data while driving? That would seem to be...unlawful.


The phone has GPS, a compass and an accelerometer. As you drive, it reports by itself. If you want to make a voice report of a collision, for example, I don't think that's illegal. Anyway, when I'm driving my wife can handle any of that. She's the navigator whether or not a GPS unit is involved.


Thanks for the review, gonna try it. I use the TomTom app on the iphone. I like the maps built into the phone just in case you lose data connection when driving in the middle of nowhere.


Waze is picking up reports that it uses to mark up the map (which is cached). It's not very much data, but without current information users couldn't beat traffic because they wouldn't know about it...


As mentioned I have the TomTom and Magellan GPS apps on my iphone. Gotta say Waze is pretty slick. I like the real time traffic information which I assume is calculated using information from the Waze app turned on. Going to try it a bit longer but so far I am impressed. Thanks for the tip.