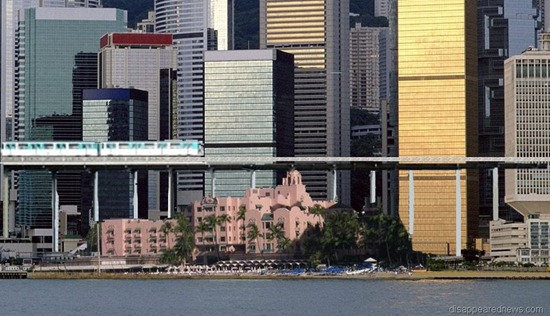 Jefferson Elementary School principal Scott K. Parker seems willing to give up the open space that is part of his school (see his Star-Advertiser op-ed p. A13, 4/25/13). Fortunately, that lawn, over which he can "scan from Diamond Head toward the Ewa end of Waikiki across the campus landscape" is not his to give away.

Jefferson School was approved as part of a deliberate planning process and became part of what Waikiki was and is. If we believe in the value of urban planning, then we should not allow it to be thwarted by development land grabs approved at the state level.

I created this mashup of Hong Kong and the Waikiki waterfront to illustrate a possible Waikiki in 2050. If we allow open space to be gobbled up as HB865/SB237 would instigate, the image may become fact.

Call your state senator and your state representative today and ask them to defeat these bills tomorrow.

City dwellers value open space as a part of the outdoor environment that we and our children should be allowed to enjoy. These spaces are designed to meet our very basic human needs and must be protected, or they disappear forever. We must prevent short-sighted encroachment into the few open spaces we still have between the hotels and condos.

Fresh air, open space and access to nature have been part of urban design since ancient times. It is only recent in history that massive development has turned cities into inhumane urban canyons.

Imagine that Waikiki came to be like Hong Kong. Would tourists come to visit, and would residents want to live there?

The Public Land Development Corp. (PLDC) was defeated for good reason, and so should its latest clones. These bills are the first rumblings of bulldozers coming to take away what is pleasant about Honolulu and replace it with urban blight.

We can follow the example of the parents and activists (see story below) who have successfully defended their community against abuses of development.

It’s time to stop HB865/SB237 from opening the door to encroachment. But tomorrow is the deadline, so anyone concerned should act today, last chance.

Affordable and low-rent housing cut? Then stop the development altogether

This is a re-run of a Disappeared News article originally appearing on July 15, 2012. The article describes how open spaces (parks, schools) have been routinely approved and then erased from developers’ plans before the project is completed—and how this can be successfully resisted. 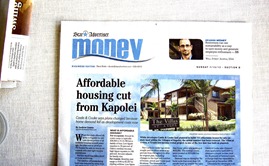 Somehow, as a project moves from initial proposal to completion, the pencil eraser gradually removes parks, schools, or in this case, affordable housing, from the blueprints. Unless citizens intervene, the erasures stick, and everyone (except the developer, of course) loses out.

There were at least two instances in which community activists won government to their side in forcing a developer to keep its promises. Old articles are now missing from the web, but we’ll look at one of these victories.

Here's the lead from the Star-Advertiser story today:

When the state offered 40 acres in Kapolei for private development of affordable housing several years ago, the plan was to produce 751 homes for sale or rent to occupants who met tight income restrictions. But the result has fallen short of those ambitions. The number of homes being built was reduced by more than 100 while many of the planned rentals were converted to for-sale housing and the income restrictions were lifted on about 20 percent of the homes.

The reaction should be “Well, you don’t get to build on public land unless the promise to build affordable and low-rent housing is kept.” But most likely, absent citizen intervention, that housing will simply not happen.

A prior conflict was won by parents and activists in Central Oahu.

[Activist and Neighborhood Board Member Laura] Brown said that, over the years, land earmarked by developers for schools has been released by the DOE and "turned into multifamily housing by the City Council."

Castle & Cooke, the same developer that now says it is cutting affordable housing this time, was made to keep its promise by the community a decade ago. From the Star-Bulletin article:

Last week, the state Land Use Commission proposed approving two of three phases of the company's Koa Ridge subdivision near Mililani, but only if Castle & Cooke would build schools to support residents before any of the 3,237 new single- and multifamily homes are occupied. The proposal was unprecedented for a major housing project in Hawaii, observers said.

Housing Finance, which facilitates affordable housing development, selected Castle & Cooke through a competitive bid process based on providing the maximum number of affordable units at the lowest expense to the state, which provided the land and some infrastructure for the project.

The current development is a perfect example of the eraser at work. From today’s paper:

But Castle & Cooke has since sought and received several approvals from the agency to alter its original plan, including changes to the type and number of homes, prices and buyer qualifications. The timetable for completing construction also has grown by roughly three years.

In the earlier case, parents had an interest in eliminating overcrowding that is rampant in Central Oahu schools. Multi-tracked, over-crowed schools create problems for families who cannot schedule trips or vacations, for example.

In the current instance, there may be no one to speak up for those who will not be able to move into the erased housing units.

There oughta be a law, something like “you draw parks or schools into a plan for approval, or specify the type and number of affordable or low-rent units, then you have to build according to that plan if approved, or you build nothing.” I’m not holding my breath.

Laura Brown wrote in a Hawaii Reporter article about the disappearing parks and schools:

…Under the leadership of Rene Mansho, the City Council approved zoning change after zoning change to convert the number of parks and school lands into additional housing. Unilateral agreements were amended or brushed aside.

When a school is erased, it’s not fair to build it in what was originally to be a park, later, or to dump the responsibility onto the DOE and taxpayers. Similarly, and particularly if the use of state land was granted, developers should be held to promises made on how it would be developed.

The City and County of Honolulu has no sympathy or empathy for those who have lost their jobs and then their homes. The city knows how to sweep people from the parks and confiscate and destroy their property, but it doesn’t do very much of anything to solve its housing crisis. Nor does the state administration, which thinks that stopping feeding programs is somehow humane or helpful.

As the sweeps and confiscation has continued, many of those living close to the city have moved to rural areas and are less able to access social services than before. In other words, they are being dumped into rural areas without thought to the well-being of the people displaced or of the effect on the receiving communities.

So any loss of so-called “affordable” housing and low-rental housing is a giant step backwards. Instead of sweeps, housing first or other evidence-based solutions should be what the city and state put their effort into.

I put “affordable” in quotes because it is a misnomer. The housing built is not for those who cannot pay low rent. It is not “attainable” housing. So it doesn’t even begin to solve the problem. Still, allowing a developer to drop a promise of affordable and low-rent housing is something that should be strongly resisted. Families could be put in those homes instead of being condemned to the beaches on Leeward Oahu. The city and state could put pressure on developers to include much more low-rent housing as a condition for building anything on the island.