Hawaii’s safe-haven law—could it use some publicity? 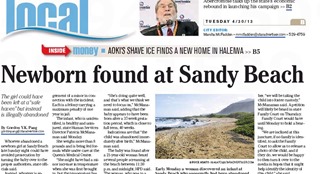 In 2007, Hawaii passed its “Safe Haven” law, over Governor Lingle’s veto. The new law permits a mother to turn in an unwanted baby instead of abandoning it.

As I wrote in July 15 of that year, “The governor vetoed the Safe Haven bill which is now law. Will her departments implement it despite her objections? Will signs will be posted and information distributed so that the law is effective?” The answer, of course, was “no.” Lingle was the first US governor in history to veto a safe haven bill, and after it was passed, it got no publicity.

I don’t know how well it is publicized today, but suggest that we look at ways to let people know it is there for them.

Of course, we may never know the circumstances that moved the mom (or parents) to abandon this baby on Sandy Beach. We don’t know her motivation or mental condition. We also don’t know if she was aware of the Safe Haven law. But perhaps this incident suggests that it’s time to ask whether more needs to be done to let the public know there is an alternative to abandoning unwanted newborns. 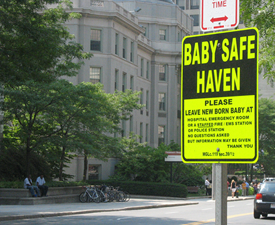 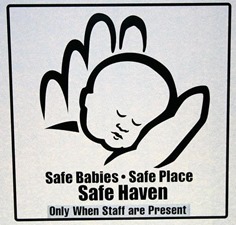 This is a logo used in Franfort, IL and appears on the Frankfort Fire Protection District Fire Prevention Bureau web page, for example.