My mind had trouble holding several concepts at the same time after skimming through this morning’s Star-Advertiser. The first is the prospect of an in-depth story on Honolulu’s pathetic road maintenance, and the second is a mention, buried in a story headlined House panel rejects gambling study, that our legislature is pushing ahead on a scheme for a space launch facility here. Now, a space launch facility really is rocket science, so the question naturally arises, given the front-page promo on the road story, if we can’t do simple science, how can we do rocket science?

Thinking that the connection between the rockets and the roads was just a frivolous juxtaposition in my coffee-starved brain, I was interested to find that they are linked. See below. 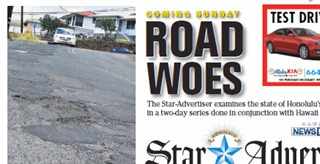 The front page promises a two-day series on the condition of Oahu’s roads starting on Sunday. The image accompanying the promo is probably a hint of what will be revealed in the articles.

That the roads here have been bad for so long is an indication of something seriously wrong in our city government. Exactly what that is remains to be determined—that is, as non-experts on road maintenance, we citizens can’t tell what the city is doing wrong. That’s why I’ve contrasted the condition of Oahu’s roads (including the disappearing paint) with roads elsewhere. There are plenty of examples of roads that remain in good condition in climates more severe than we have. How come we can’t do the same?

I’ve also suggested that the state could make use of a “Chief Technology Officer” or chief technologist. The CTO could advise the state and city on a variety of technical issues. But even with no CTO, why can’t we get help with our chronic pavement problems? Someone must know how to maintain roads, but that person doesn’t seem to be involved. And it shouldn’t be rocket science.

I’ve also written a couple of times about permeable pavement, and mentioned noise-suppressing pavements in use in Japan and Hong Kong, and touched on the use of noise barriers in those two countries as well. As far as I know, we have none of that.

There are books on the structure and selection of asphalt. I understand that we have only one vendor here. Are we simply taking what they offer, and it just doesn’t work? Should we be buying something different? Are the city’s specs up to spec?

Road paving is a much-studied area of civil engineering. Searching for books on Amazon or elsewhere, I see that there are models for asphalt that incorporate things like viscoplasticity, viscoplasticity with damage, disturbed state mechanics model, and fatigue failure criteria. That’s all cribbed from a single book review. I don’t know what it all means, but is there someone in our government who does?

Stealing from another book review:

Again, I’m clueless about this (and should be), but what is the surface roughness of the asphalt they’re putting down? No, don’t answer me, I’m just thinking out loud.

Mechanical properties of constituents, including binder, aggregates, mastics, and mixtures

Is the binder they use up to snuff? What about their mastics?

Ok. And I haven’t even googled what it might take to make paint stick.

If the Star-Advertiser stories could start an investigation into why we continue to suffer bad roads, that would be a great thing.

Rocket science or pie in the sky?

I’m pretty sure that it was Guy Kawasaki, in a well-attended talk at the UH business school, who shamed the Department of Business, Economics and Tourism (DBEDT) by pointing out that their many promotions of Hawaii as being between the US Mainland and Asian time zones, or being located right in the middle of the Pacific Rim, was not an advantage, but a disadvantage. Kawasaki said that Hawaii was simply in the wrong place to do the kinds of things that DBEDT was talking about.

So is this space launch thing just a regression to a prior state of dysfunction? Maybe not, but the Star-Advertiser article mentioned a House resolution that just passed its committee hearing:

The committee moved forward a resolution to use federal funding to research the feasibility of "creating a world-class commercial space launch and control facility in Hawaii." Rep. Angus McKelvey introduced the resolution, which claimed Hawaii's location and telecommunications infrastructure make it ideal for a space launch facility. The state already invests in aerospace research.

Now, in this case, a location near the equator does seem advantageous, although Hawaii is still far from any and all resources necessary to maintain such an operation. If parts are needed, or if someone has to be called in to consult, for example, there is still an expense and delay that other sites don’t encounter. But ok, we have the equator on our side this time.

So what’s the connection between rockets and roads that I promised? From the House resolution:

Somehow, money from the fuzzy joint partnerships between federal agencies and private industry will get us our better roads! And actually improve the communication networks that the resolution claimed earlier were already “state-of-the-art.”

So there’s the connection I promised. The  Economic Development Committee has an idea, if it flies, on how to fix Honolulu’s bad roads. I’m glad to see that someone is thinking out of the box.

I always add, when I mock unlikely state tech initiatives, that I hope I’m wrong. We’ll see, of course.

Where is Guy Kawasaki when we need him? These people still don’t get the message.

The SA story noted that with the shut down of Tesoro, Asphalt Hawaii will be a monopoly supplier of asphalt. I don't know about you but when I hear "monopoly" I immediately think of higher prices, lower service standards and longer schedules. So on one hand we have the Mayor pushing for miles and miles of repairs, let's move it, I'll even fill a few holes by myself. On the other hand we have one supplier thinking now may be a good time to get a higher price. With only 3 road repair companies and most of the work going to Grace Pacific, the outlook for meeting the Mayor's goals is slim and none and slim is on Hawaiian Air to Vegas.


Cynicism seems justified. You have no idea how much I restrain myself.