Note to legislators: Check your ethics at the door Monday night 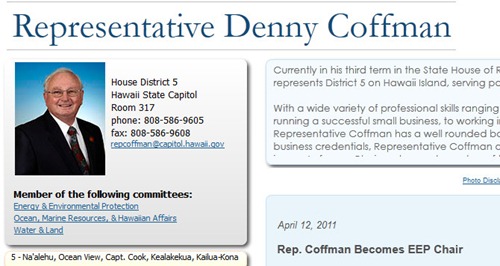 Rep. Denny Coffman joins our rogue’s gallery of legislators holding fundraisers during the legislative session, accepting—nay, soliciting—contributions from corporations, lobbyists and special interests while bills that might affect those interests come before them.

Coffman represents District 5 on the Big Island, yet his fundraiser ($50 suggested donation) is being held in the usual spot in Honolulu, the Mandalay Restaurant. It’s convenient for the lobbyists, and of course almost impossible for his constituents to attend due to the cost of air fare, hotels, etc.

Coffman is also the chair of the House Committee on Energy & Environmental Protection. All the more reason not to hold a fundraiser outside of his district and during the session. It will be interesting to check his campaign contribution reports when they are finally available. 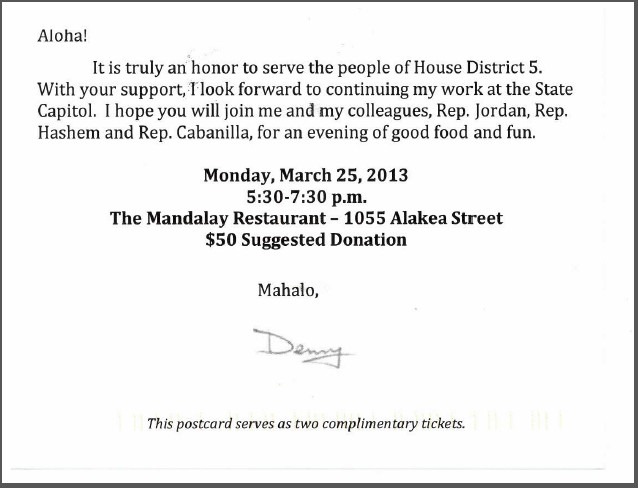 The invitation above was not sent to someone residing in the 5th District. I do wonder, with these events, how many invites the legislator bothered to send to the far-away home district. Nevermind, just an idle thought. I mean, why waste postage?

Note the show that is being put on for the lobbyists—what an opportunity.

It is truly an honor to serve the people of House District 5.
With your support, 1 look forward to continuing my work at the State Capitol. I hope you will join me and my colleagues. Rep. Jordan, Rep. Hashem and Rep. Cabanilla, for an evening of good food and fun.

Corporate contributors and lobbyists may have “fun,” but mainly they make investments. They’re not philanthropists, they’re shrewd businesspeople. Coffman is cleverly offering up not only himself, but Reps. Jordan, Hashem and Cabanilla for face time.

I assumed, when I started this article several days ago, that the tin cup would be out only for Coffman himself, since last time I looked, the other three had not filed papers with the Campaign Spending Commission that they were holding fundraisers on that night. But yesterday Rep. Cabanilla did file papers for a $50 fundraiser, as required by law. I do not yet see anything posted for the other two. Cabinilla’s filing looks a bit rushed—for example, she did not state the starting time correctly, but presumably it’s the same as Coffman’s.

Will Reps. Jordan and Hashem keep their hands in their pockets while at the Mandalay fundraiser? Would they turn down any envelopes offered to them? Hmmm?

It’s not unusual for legislators to pop into a fundraiser held by one of their colleagues, but these three have shared billing on the invitation, and at the time it was sent out, had yet not filed the required papers. 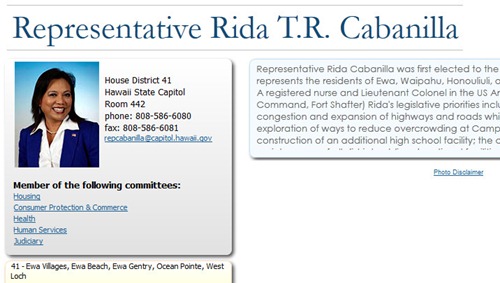 So now that Rep. Cabanilla is officially holding a fundraiser during session, we should note that her constituents actually are able to afford to attend. All it takes is $50 (suggested contribution) and the cost of parking or the bus. Would they be welcomed for only the usual $25 contributions? I don’t know. (Hint: the food isn’t really worth $50).

Nothing is changed, though, with regard to the ethics of holding a fundraiser during the legislative session.

Now, will Reps. Jordan and Hashem also file with the Campaign Spending Commission? They can do so any time before the event itself, it seems.

I'll be hosting a fundraiser at Hukilau Honolulu on April 17th, 2013 at 5:30pm.
Please save the date and stay tuned for more details!

Hukilau is located in the Executive Center Downtown.

Judging from the comments - people don't seem to be that concerned over fundraisers held during session - or maybe using comments as an indicator isn't the best gauge ? I dunno.


Thanks for the tip!

You're probably correct that not so many people care. I post these because perhaps that will change. Also, one day perhaps a bill to prohibit contributions during session will get heard.

Again, thanks for the information. So far there is no notice on the Campaign Spending website.

While I dislike the idea of fundraisers being held during the legislative session, as a practical matter -- and this is NOT unrelated to the question of "corruption"-- few will bother to attend a fundraiser held any other time of the year. And politicians DO need money under the current election system. So if they want to continue to "serve," they need to raise money. And they can spend three or four times the effort "out of season" or do it during session.

So I am not sure those who do succumb to the temptation of having one during session can fairly be termed "rogues." (Heck, if Jessica Wooley is doing it, the standard for "rogues" may need re-calibrating. For that matter, I regard Denny Coffman as one of the more honest members of the House as well).

I think I am more concerned that Denny shift from the "Dissidents" into the Say faction appears to have taken root, as shown by those he is fundraising with. No knock against Jo and Mark, but Rida Cabanilla? I guess I am not close enough to assess the friendships within the House, but this grouping is not a natural fix and suggests the reason they are grouped is for the benefit of those who want to help the Say faction qua FACTION rather than out of personal or ideological sympathy for the legislators.

So I find Denny growing integration into the Say faction more troubling than the fact he is willing to hold a fundraiser during session.

I might be useful if one of us "good government" types would put a little more effort into examining who gets campaign contributions from whom and, even more difficult, tries to figure out, in each case, WHY? As someone who has, on occasion, had fleeting thoughts of running for office myself and who has a number of friends who have run, I recognize that some candidates/officeholders need are more dependent upon private sponsorship than others. Few people can afford to take six months out of their lives to be legislators. Not if they are married, have kids and a mortgage to feed. And few professions allow you to take a leave of that duration, with lawyers attached to a large firm an exception. A few of us have enough personal wealth (or are married into wealth) to the point we can afford to run for office without worrying who might be able to help us get there.

Jessica Wooley was able to defeat Pono Chong last election in part because groups like the Sierra Club (and others) targeted that race, substituting their credibility and volunteer manpower for money. Now, with Pono gone and Jessica in, the environmental and progressive activists are likely to move on to another race. Because, as you are well aware, the progressive groups have very limited resources and have to utilize triage to prioritize where those resources should be directed. The corporate and pro-development forces who liked Pono will either have to try to win Jessica to their side or defeat her. I expect they are showing her both the carrot and the stick, with "good cops" and "bad cops" interacting with her. We should watch to see if some of the corporate and agri-business "good cops" show up at her fundraiser. But we should also avoid jumping to the conclusion that the presence of the good cops would prove she has gone over to "the Dark Side."

Thanks for all you do. This is a valuable site for nurturing critical, informed understanding of political and economic processes in Hawaii.


Kolea, thanks for your extensive comments and kind words.

I don't feel like wavering on the ethics of soliciting these contributions while the contributors may have matters up for a vote by the legislator involved. What's right about that?

Also, I have no illusions that because these articles are posted, any legislator will change their practices. But in the aggregate, and if correlated with what we can learn about campaign contributions, perhaps in time there could be more respect for ethics in government in this and other matters. Perhaps there could be rules or a bill passed one day to enforce ethics on the unethical.