Caught fundraising during the legislative session (2)


“A successful election campaign depends on communication, and communication costs money. However, it is believed by some that money has the potential to corrupt a candidate, to drive him or her to serve their own interests rather than the public good. For instance, there is a belief that an unusually large financial contribution could influence the voting behavior of an elected official. Campaign finance laws are intended to reduce the potential for corruption, or even the appearance of corruption. “—  National Conference of State Legislatures

Is a $100 donation by corporate/business interests enough to buy a politician? Is soliciting donations during the legislative session, while bills that may affect donor’s profits come before the politician, unethical?

Hawaii’s state legislature has repeatedly declined to prohibit fundraisers held during session. A bill introduced this session was not even heard, much less debated. So should a politician be faulted for taking advantage?

You be the judge. 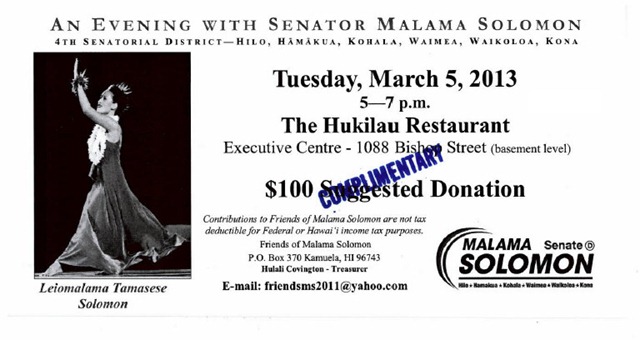 The Executive Centre is on Bishop Street, just a few blocks from the State Capitol and convenient for corporate suits and lobbyists—but not, of course, for her constituents. 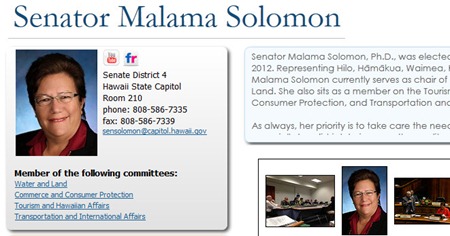 Senator Solomon represents a district on the Big Island. It is unlikely, given the distance and cost of airfare, that very many of her constituents will be able to attend her fundraiser tomorrow night. Add in the $100 suggested donation and it’s clear that the fundraiser is aimed at business, corporations, their lobbyists, and other special interests located right here on Oahu.

Former Big Island state representative Bob Herkes also was fond of holding fundraisers in town during session. The late lamented Big Island Weekly reported that Herkes “didn't have a single contributor with an address in his own district” in 2008. For a list of his contributors from that article, see: Bob Herkes: “Lobbyists’ Favorite”, (4/29/2009).

Basically, an expensive fundraiser held in town sells access. Sen. Solomon is Chair of the Senate Committee on Water and Land. She represents a valuable commodity for investment.

Apologies to the Big Island Weekly. I got a dead link in checking the earlier article, and confused it with the Big Island Journal, which was closed in 2008. Sorry. And thanks to Anonymous for pointing out my error.
This work is licensed under a Creative Commons Attribution Non-commercial Share Alike license.

what is meant by 'the late lamented Big Island Weekly'? The BIW is alive and well, publishing weekly...


This is an out-and-out advertisement for an invitation to purchase legislation.


Oops, sorry that was yesterday's (Sunday) paper, page A10 for Speaker Souki's fundraiser....see you all there.


Thanks for mentioning Souki's fundraiser. I missed that. It was a small ad on an inside page. Glad you spotted it.