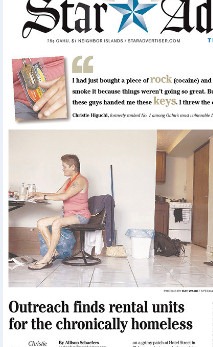 Sadly, today’s top news was the placement of one person who was at risk of death on the streets of Honolulu into an apartment under a program run by a partnership of the Waikiki Health Center and U.S. VETS. The article confirms that all of ten people have been placed in homes under the program, which is funded by a grant. Only 16 more people can be placed under the grant. See: Outreach finds rental units for the chronically homeless (Star-Advertiser p. A1, 2/5/2013)

One obstacle is described as landlords’ reluctance to rent to the homeless. Undoubtedly this is a problem, but undoubtedly also the program is making only a minimal dent in Honolulu’s troubling homelessness problem. Reading between the lines to find what the state is doing to increase the number of units for its small Housing First effort, one finds nothing except that there is a proposal before the Legislature to increase funding for the program—by only 50%,

Writer Allison Schaefers did a good job explaining the cost saving to taxpayers and the benefit to individuals when people are placed into permanent housing. For example, quoting Paul Oshiro, program manager for the Waikiki Health Center Care-a-Van drop-in center and clinic:

"Statistics show that living on the street may cut a person's life by 25 years. It's great that by actually improving someone's life, we are also saving taxpayers money," he said.

Last year, 4,949 homeless people received outreach program services on Oahu, Oshiro said. "The cost to taxpayers of allowing them to remain on the streets is far higher than offering them permanent housing with support services."

The community has always done its best. What we need is a shift in focus on the part of state and particularly Honolulu city government to putting beneficial programs such as Housing First in high gear instead of devoting their energy to punitive measures that benefit no one at significant taxpayer expense.

A perfect example is the Star-Advertiser breaking news story on their web page today, City tallies haul from encampments (Star-Advertiser, 2/5/2013):

The city issued 127 removal notices at Thomas Square and the other locations.

The cleanup also included public sidewalks in the areas at Aala Park, Smith Street, Pauahi Street, River Street, Makiki’s Cartwright Park, Pawaa Park, Kalamalu Playground and Park and Punchbowl and Queen streets. However, no items were removed from these areas because homeless campers removed the items after they were cited.

The city confiscates and is supposed to store property for 30 days, during which it can be re-claimed. In other words, taxpayer money is being used not to help those living without a roof over their heads (which includes working families and children), but to punish and disadvantage them.

And the city does this over and over, despite its lack of effect. Worse, it has not been following its own ordinance, and faces a lawsuit. A hearing in March will seek first an injunction against city workers trashing seized property in dumpsters.

That the  raids have failed is beginning to be noticed, apparently. For example, Stephan Jost, director of the Honolulu Museum of Art, wrote in part in a guest column:

I dream about Thomas Square as a park where all people feel welcome and its unique place in Hawaiian history is honored.

But Jost makes an exception for those living without a roof over their heads—in other words, the column appears to support welcoming only those who can afford a home. Camping out at the edge of sidewalks has been forced on the people because the city has systematically chased them away from Thomas Square Park and other areas.

I wonder if the Honolulu Museum of Art is willing to contribute in some way to solving the problem instead of discriminating against those unable to afford its expensive membership fee (unfair, I know, but then, please stop complaining about your spoiled view). Worth repeating:

I dream about Thomas Square as a park where all people feel welcome and its unique place in Hawaiian history is honored.

Well, it’s time for everyone to move from dreaming to taking effective action to assist the homeless.

REAL HOUSING, REAL CAREER TRAINING, and REAL JOBS are what the homeless need....NOTHING ELSE!