“Eight in 10 restaurant inspections on Oahu result in the issuance of a major violation (given out for problems that significantly raise the risk of foodborne illness).”

It’s good news for everyone on Oahu who cares about the safety of their food supply (and who doesn’t?) that the Department of Health intends to increase the number of inspectors:

As part of an ambitious plan to drastically reduce the "extremely high" number of major food safety violations found at Hawaii eateries, the state will more than double the number of restaurant inspectors to 26 over the coming year, increase the frequency of unannounced inspections of food establishments, and move to a placard system that will let customers know if food safety problems were found.

Still, DOH has been inefficient with the use of the resources it has had at its disposal since the budget cutbacks, allowing restaurants and food vendors to flout the law—and in doing so, DOH has put our health at risk. The report that even with reduced inspections DOH is finding that eight out of ten visits result in major violations simply underlines that food safety on the island is highly questionable. Presumably, about the same ratio of violations would apply to restaurants that the DOH has yet to inspect. And are the violations cleaned up after the inspection? The news article does not say.

When Governor Linda Lingle slashed the number of Department of Health and Department of Agriculture inspectors to almost zero, the outcome was predictable. Restaurant operators, food vendors, farmers’ markets, roadside stands, farmers spraying insecticides—they all knew that the chances of the state catching a violation would drop to essentially nil.

Restaurants were inspected roughly once every two years, according to media reports. When an inspection took place, as will be described below, there was no effective pressure in the instances I am familiar with to enforce compliance.

Weekend farmers’ markets were never inspected because DOH refused to authorize any overtime. The same applied to evening markets. Vendors could (and did) sell fish, for example, without a permit to do so. Eggs could be (and were) left out in the hot sun without refrigeration and without worrying about a food safety inspector coming by.

The rat situation in Chinatown became acute. It was not a DOH inspection that discovered the rats because, like mongooses imported to control the rat population, DOH inspectors only emerged during the daytime and the rats, of course, are nocturnal. It took my rat video to bring an end to the infestation of a particular Chinatown market, and even then, DOH would not authorize overtime to remediate the situation. 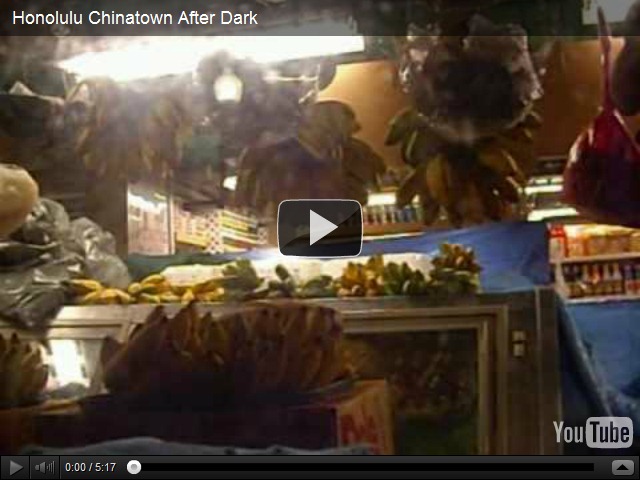 Of course, no one wants to eat produce that rats have sampled first, but Oahu’s food safety problems are not limited to pest infestations. For our food supply to be safe, it must be protected from farm to market, from restaurant kitchens to the plate put before you. An important role of government is to assure that appropriate inspections take place and that problematic situations are resolved promptly.

We are told to “buy local” for our health and to help Hawaii reduce its dependence on imported foods. For this to work, farmers must respect the laws that aim to assure safe application of hazardous pesticides and other farm chemicals. Tweets reported pesticide overspray drifting over crops being picked for market. Was anyone’s health endangered? We’ll never know. What chance is there that a crippled inspection program would pick this up? In order to confidently “buy local” we need to know that our locally-grown food is safe to eat.

In 2011 I reported to DOH inspectors that a certain restaurant that I liked to frequent was not emptying or washing the little milk pitchers that come with orders of coffee after they were removed from tables. So if a kid sneezed into the little milk pitcher, just as a hypothetical, it would be delivered with snot intact to the next coffee drinker, and so on, for the rest of the day perhaps. Yuck.

It’s not up to me to decide if something is a violation or not, that’s up to the inspectors. DOH did dispatch an inspector to that restaurant, but instead of observing the activity to see if it was problematic or not, he approached the manager instead and asked if they were really doing that. The manager denied it. I basically stopped going there, or when I did, I didn’t put any milk in my coffee. At a recent visit I observed that the staff was doing exactly the same thing. The little white pitcher of milk was not put with other dirty dishes by the busperson, but was kept separate and placed on a tray with other milk pitchers to be refilled and reused. And around and around they go, when they are washed, no one knows. As far as the DOH knows, this is not happening, even though they sent an inspector.

So much for DOH zeal in protecting our food safety.

Peter Oshiro, manager of the Department of Health's environmental health program, said the work under way in Hawaii is ultimately about decreasing the incidence of foodborne illnesses.

Well, then, DOH, please get with it.

Citizens can and should report unhealthy situations that they may observe, if only because DOH is unlikely to catch the problems otherwise. It appears that people are, indeed, complaining more:

Meanwhile, 1,812 of the state's 9,800 food establishments underwent inspections last fiscal year after complaints from the public, up 26 percent from fiscal year 2011, when 1,433 complaints were made, DOH  figures show. Of the complaints made in fiscal year 2012, 254 involved reports of foodborne illness, according to the Department of Health.

I got sick at least once and possibly twice over the years after eating bentos that likely had not been kept under refrigeration or were not removed from sale after the allowed time. So I became sensitive to the problem, which I felt would be widespread in the absence of DOH inspections. Fortunately, this is one of a few things that anyone can see and then take action to protect everyone’s health. Bentos left out on counters all day are easy to spot (some sushi bentos are exempt).

Packages of most types of bento or prepared food are supposed to have labels affixed with the date and time they will be removed from sale, which should be within four hours of preparation, if I understand the requirements. Even today, if you pick one up from a tabletop or counter and check it, many do not have the required stickers, or the time has expired. While the food sits unrefrigerated, bacteria can divide and multiply, increasing in number until they can make someone sick.

As an example, I recently saw a counter covered with packages of laulau and fish, each package marked “keep refrigerated.” The packages are left there all day, and probably put away at the close of business to be sold the next day.

Inspectors can’t be everywhere, of course, so when they do visit an establishment that is violating the law, at least they should act decisively. I found that they have not, in the few cases that I did report. The location above is one of them, and an inspector did visit after my phone call to DOH, but clearly the store has chosen to ignore the visit. How soon will the inspector be back? I called and left a message about the continuing problem, but still, the packages are out on the table.

At another location I noticed bentos sitting under warm lights without the required stickers. So thinking that the multiplication of bacteria that this handling assures could potentially make people sick, I did call it in so that an inspector could check. I didn’t go to the location specifically to check on this vendor, I just glanced at the bento packages when I passed by to visit a nearby store, which was infrequent, and then called it in. DOH did send out inspectors, but declined to fine the vendor. In fact, inspectors made seven visits over the months. So the problem persisted for all that time. Had I not repeatedly called them, would the bentos still be unlabeled today? Most certainly.

For those interested in reporting bentos left out in the heat, or anything else you feel should be inspected, the number of the Sanitation Branch is 586-8094. You can ask to be called back if you wish, and I recommend that you do that to keep DOH accountable. An inspector can explain the regulations to you so that you’ll become better at recognizing situations that might make you, your family, or others sick.  I was told that calls would be kept confidential.

have to agree with you; this okazuya style mentality has to stop! leaving food out at room temperature for more than 2 hours is ridiculous. rice, meats, fish, you name it. the old style thinking that as long as it is cooked through and is dry that it would keep has some merits but is simply not foolproof enough to tempt fate!


Great article! Does Hawaii have a restaurant inspection report card available via the web for public viewing? If not it should, like Oregon. Full disclosure. DOH needs to fully embrace their mission statement!