Caught fundraising during the legislative session

When constituents received this postcard in the mail, the first thing they saw was a cheerful face looking out at them: 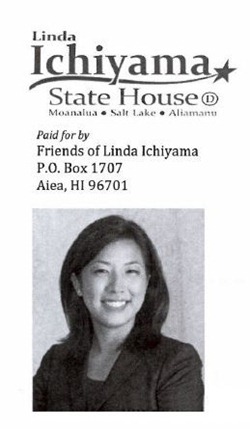 Linda Ichiyama represents House District 32 - Moanalua Valley, Salt Lake, and Aliamanu. She’s working hard at the Legislature as Vice-Chair of the Transportation Committee and of the Vice-Chair on the Higher Education Committee in addition to serving as member of other committees. 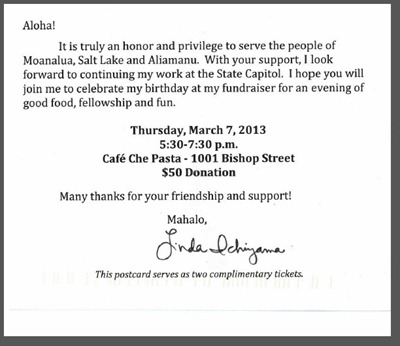 On the flip side (which yes, has a double meaning) is this invitation to a fundraiser and birthday celebration at the classy Café Che Pasta in downtown Honolulu.


What can be the “flip side” of a happy birthday party for a hard-working state legislator?

Check the date: March 7 is during the legislative session.

Which means that even as she solicits a minimum of $50 donation for her fundraiser, bills are arriving on her desk as Vice-Chair of the Transportation Committee or as the Vice-Chair on the Higher Education Committee.

While constituents see the smiling face on the front of the invitation, special interests, which could mean companies whose business would be affected by bills pending this session, will have this picture in mind as well: 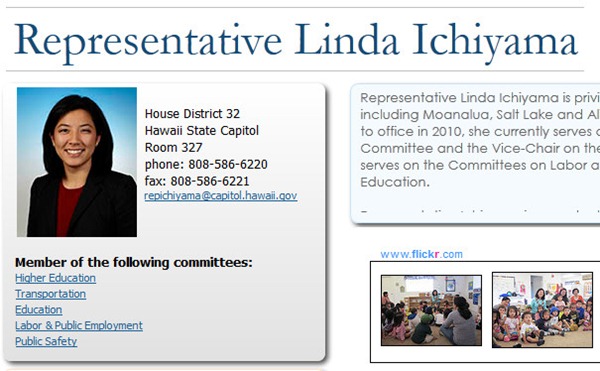 Contributions made to a candidate running for office are very different from contributions made to a sitting representative who may influence future profits. Although we don’t call them bribes “investments,” we all know that corporations and unions contribute strategically. They give money because it is in their interest to do so, not to celebrate a lawmaker’s birthday.

Whether or not a legislator insists that they are not influenced by donations, the donations keep coming and accumulate often to thousands of dollars. These investments would not be made year after year were they not in some measure effective. Corporations are not philanthropies. And timing is important. Given the chance, isn’t now the time to give? Why not—if legislators are suggesting you give now …

Oh, and isn’t $50 just a wee bit steep in this economy? $25 has been more usual. Who is more able to give a donation of $50 or larger, a family working several jobs or a special interest?

Senate bill would bar these fundraisers 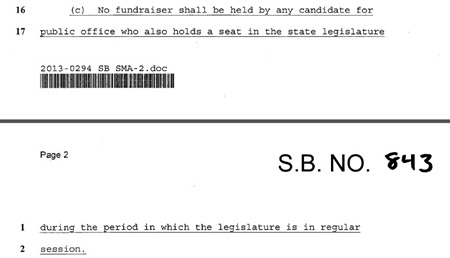 A bill has been introduced that deals with fundraising during the legislative session. It’s a good bill because it reinforces the integrity of the democratic representative process. SB843 has only a single referral, to the Senate Judiciary committee, but has not been scheduled for a hearing, and it’s too late… tomorrow is the deadline for single referral bills.

Oh, there’s nothing wrong with sending a cheery birthday card to a legislator at any time, even during session. Just don’t do what your grandparents might have done, that is, enclose a check.