UPDATE: Costco installed gas pumps that had standardized stickers that did not reflect the legal requirements of Hawai`i state law. Since the original article, Costco has partially modified its stickers to more accurately reflect state law.

So does its gallon of gas.

The Hawaiian gallon contains nearly 234 cubic inches of fuel — about 3 cubic inches more than is dispensed in the rest of the United States.

The extra volume, required by state law, helps offset the hotter temperature in the tropical climate, which causes the gasoline to expand.

If the gallon weren't temperature-adjusted, Hawai'i residents would receive less energy per gallon than called for under the government standard.

That's because for nearly a century, gasoline and diesel have been measured across America as if they were being dispensed at a temperature of 60 degrees — a more condensed gallon of 231 cubic inches.

The larger Hawai'i gallon saves consumers in the state millions of dollars a year. But across the rest of America, consumers will lose an estimated $2.3 billion this year because of "hot" fuel.

No other state adjusts for temperature fluctuations when dispensing fuel, including warm-weather states such as California, Texas and Florida, where drivers lose hundreds of millions of dollars a year.

But is that what happens when you buy gas at Costco? 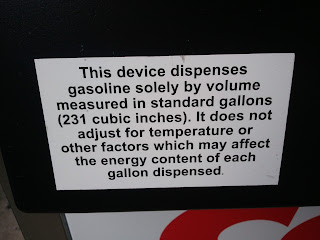 This notice is found just below the payment keyboard 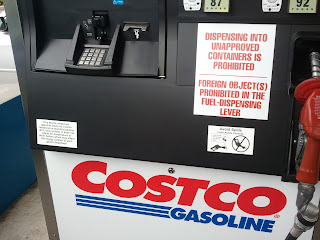 Update:  Costco does in fact give Hawaii residents a full  gallon. Costco had mislabeled their fuel pumps and has since corrected the problem.


Mahalo Henry, I will stop by and check this out in Kailua-Kona.