Under-reporting the news allows government to get away with murder

I attended the same meeting that Star-Advertiser reporter Sarah Zoellick did, but came away with much more than she told readers in her Saturday article, Federal and local homeless advocates share ideas (Star-Advertiser p. B5, 11/10/2012). Yes, sharing took place, but it would have been great if the reporter had let us in on the controversies that the meeting revealed.

As the meeting progressed, it became clear that many disparate organizations, including non-profits and religious groups, are working hard to fill the gaps in the state’s lack of effort to assist those living without a roof over their heads. There was sharp contrast between the dedication and achievement of these organizations and individuals, hobbled by limited resources and hence having limited effect, and the inaction of city and state government. Yet the article reported:

"We're really smart out here but we could get smarter," said Colin Kippen, the governor's coordinator on homelessness.

This is part of the problem. Neither Hawaii nor the City and County of Honolulu are the least bit smart. For example, more from the story:

Kippen also said that, based on the dialogue with [Matthew] Doherty [coordinator for the Western region of the U.S. Interagency Council on Homelessness], he plans to spend time looking at access requirements for programs that are not specifically designated as homeless services, but do work to help that community.

"Whether it's mental health services, whether it's counseling of some sort, those are the kinds of things that we may be able to tweak to increase utilization and increase service," he said. "And that's not really hard to do, it's just that we have to start to have a broader perspective."

Poverty and homelessness cannot be cured by cutting back government services

“Not really hard to do?” ?? The reality is that provision of mental health services to the disadvantaged (including the homeless) is something that the state has been drastically cutting back for a number of years. Let’s jump back to the Christmas holiday of  December 28, 2009 when then Governor Linda Lingle was about to shut down mental health services on the island of Molokai: 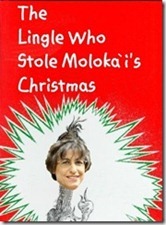 Hawaii has already cut back as much as 75% of its adult mental health services according to some estimates. This has left many consumers without the supports they previously depended upon, and made them more reliant on the surviving programs. The network of Clubhouses is part of that community system.

It’s one thing to reduce services, but Lingle’s cuts are pulling the supports completely out for those who have relied on the Molokai Clubhouse.

The Department of Health had cut back on adult mental health services so severely that on Molokai, the Clubhouse was basically the only place consumers (including the homeless) could obtain state services. Disappeared News learned of the closing just a couple of days before the planned shutdown and the release of the staff. The closing was averted, I think it’s safe to say, by force of blogging. The state tried again and again to close the Molokai Clubhouse (click the link).

Elsewhere, including on Oahu, and up to the present, the DOH began turning consumers away from the clubhouses verbally—that is, without creating a paper trail. Someone might show up and be told, for example, that they had the wrong insurance and were denied entrance. Advocates had little to no evidence of what was going on.

So the state was smart, real smart. They learned how to sacrifice human lives while averting the media spotlight. Of course, that’s because the media seldom shine their spotlight on the consequences of state actions or lack of action.

Others at the meeting complained about the “criminalization of homelessness” here, which got a brief mention in the newspaper article, just those three words. I know that there were comments on police sweeps, including during APEC, and the confiscation, often illegally, of the meager possessions of the homeless. I know this was mentioned because I spoke up on the subject myself at the meeting. I also mentioned Governor Abercrombie’s injunction to stop feeding the hungry in parks. No, he didn’t put it exactly that way.

Now, how many people died as a result of city or state actions (or inactions)?

Some deaths have been counted, but not by the state

The “disappeared news” is that people do die as a direct result of government actions and decisions, and that state cuts in mental health services have resulted in avoidable deaths, no doubt including deaths among the homeless. The Administration and Legislature are well aware of the consequences of their acts:

A measureable and significant increase in avoidable deaths was reported in testimony given to informational briefing on state administration cutbacks in adult mental health services on Tuesday, March 16, 2010. This briefing was an opportunity for the public to give testimony, following previous briefings by the administration.

The first testimony was taken under oath, and after just a few minutes the news came out—a 36% increase in deaths 2009 over 2008 has been recorded.

These avoidable deaths can be attributed to cutbacks in state services to adult mental health patients.

I did not notice any press in the room, so here is a video snip. Towards the end is the blockbuster. This news should not be disappeared.

These hearings and informational briefings do not, in my observation, result in government action to reverse the damaging course of state agencies. Nor does the media pick up the ball which was handed to them.

Incidentally, as we have mentioned here a couple of times, Governor Abercrombie continues to argue in court that medical services for migrants including Micronesians should be drastically reduced. The 9th Circuit has heard oral arguments and may render a decision at any time.

When President Obama dropped bombs from drones on three American citizens, there was at least some outrage. When former governor Linda Lingle severely cut back on mental health services or attempted to deny dialysis and chemotherapy to Micronesian and other migrants (anecdotally resulting in 27 deaths before the court intervened with an injunction), where was the outrage? Where are the media’s hardball questions on the effects of state cutbacks? From Disappeared News in August, 2011:

It is not too harsh to say that the state administration’s decision to continue the appeal will result in deaths. When Lingle sent out her “death letters” in 2009:

“Will Swain, president of Pa Emman Kabjere, a group of 165 Marshallese cancer and dialysis patients, said many dialysis patients simply stopped treatment on Sept. 1, 2009, after receiving a letter from the state informing them they will no longer have coverage for dialysis.

The state’s brief … reads like a cold legal argument. Should the state prevail, it will leave the Micronesians and other Pacific migrants once more without access to life-saving medical treatment that other residents of Hawaii have.

Skipping ahead to Sunday’s paper, an article on a major DOH failure dominated the front page (see image snip below) but again, the hard questions were not asked. This article describes yet another glaring neglect of the poor and disadvantaged, including those living without homes.

The numbers below the illustration, if you add them up, report that 21.6% of calls from “those who [were] suicidal or in mental health crisis” were known to be dropped.

I put “were” in brackets—the original had “are.” “Were” seems correct for those who were suicidal, called, and did not get help. How many went on to take their own lives?

Further questioning might probe who was responsible for the deaths.

During the heyday of the Felix Consent Decree, parents and the media kept DOH actors such as the head of the Child and Adolescent Mental Health Division in the spotlight for damaging cutbacks in services even as the consent decree was in force. Why do we not hold Dr. William Sheehan accountable for cutbacks in services in his division (Adult Mental Health Services) or in this instance for the neglect of this important hot line, which has no doubt resulted in avoidable deaths?

"It's horrendous," said Bud Bowles, executive director of United Self-Help, a Hawaii nonprofit that provides support groups and classes for those with mental illness. "This line we're talking about is the 911 for mental health."
…
Screeners at the hotline have the ability to deploy a crisis team, are trained to deal with people threatening to harm themselves or others, and can serve as intermediaries, calling 911, a client's doctor or mental health professionals to assist someone.

In other words, on Dr. Sheehan’s watch, not only were critical services cut back drastically, but crisis teams were not deployed nor did many people at the point of suicide or threatening to harm others get the assistance they needed. Shouldn’t someone in the commercial press question Dr. Sheehan and other DOH officials more closely about the consequences of, and their responsibility for, AMHD dysfunction?

The cutbacks started before the current recession and cannot be blamed on the present economic situation. Nor can they be blamed only on Governor Lingle and her administration. The cutbacks continued under Governor Abercrombie and have not yet been remedied.

Pretty words do not substitute for resources and action

Talking about assisting the homeless starting from square one simply demonstrates that Hawaii is nowhere on this important issue. Plans and nice words don’t solve the problems that cause homelessness in the first place. Substantial investment in programs including creation of low-cost rental housing, restoration of state services, and devoting meaningful resources to evidence-based methods of preventing and remedying homelessness do.

While prettying up the future, the city continues to criminalize homelessness, and in many instances, both the city and state are certainly responsible for some avoidable deaths.

When it comes to the disadvantaged, there seems to be little aloha in the government of the Aloha State. Worse, state and city actions can kill. We just don’t know the exact number of deaths. Our commercial media could help us find out.