An impressive amount of garbage delivered to our homes this morning

Stores are counting on Black Friday sales, and so they advertise heavily, of course. How heavily? 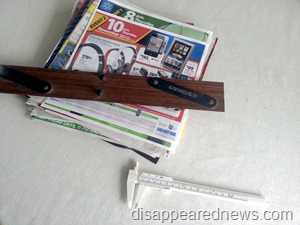 This morning’s paper seemed to be more ads than news. So why not measure it? Basically, we shucked the paper first thing and were about to throw out all the ads anyway (the recycler doesn’t want colored paper, only newsprint). We took a moment to measure the heap on the dining room table.

My caliper is metric, so taking out all the inserted ads and pushing the air out with a weight, the pile came to 19.1 mm high and weighed 885 grams.

Using the Star-Advertiser circulation at the end of October as given in an article, 125,722 weekday copies, that would be 2,401,290 mm or 7,878 feet high, if all were piled up together. Now, taking the height of one story in a building as approximately 10 feet (it does vary according to the individual building), that’s 788 stories.

That would be a pile more than ten times higher than the proposed 650-foot tall Kakaako tower.

The amount of newspaper to be discarded in landfill or burnt in the city’s incinerator plant just from today’s edition would be 245,295 pounds, or 123 tons.

This probably happens every year.

Who knows how much the Christmas shopping advertising amounts to, if all the daily and Sunday ads were collected?

Thanksgiving is supposed to be a quiet holiday where we pause to give thanks. Instead, it has turned into a major commercial event with some environmental impact.

(pic obviously not to scale)

This year, the holiday is also the occasion of a planned nationwide labor action. While there is always much that each of us can be thankful for, Walmart workers feel excluded. Many may go out on strike during the Black Friday sale, saying that the company does not pay them enough to live on and they have to rely on government assistance. Walmart is also stealing their holiday dinner by opening for Black Friday early this evening.

The workers are not unionized, so we will have to check the news later on to see if the strikes are actually taking place.

Only you could put these advertisements in the proper perspective, Larry. I expect that we will endure such garbage from SA until after the New Year. Personally I don't look at any of the adds. I am turned off by the commercialism of Christmas.