The first warning we had was a tweet from Hawaii Civil Defense ( @HI_CivilDefense). There was nothing on newspaper or other media sites at first. This is a good tweet to not only follow but to send to your phone. 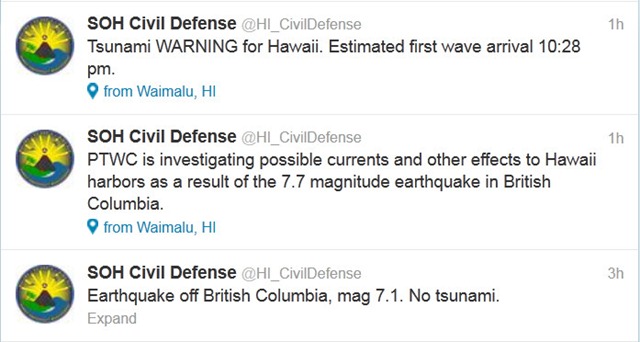 Of course, the most up-to-date information is indeed the PTWC at their website here. There’s a table with warnings in html or text form.

Meanwhile, various news outlets are doing more or less well. The TV sites seem to be on it, but on the other hand, just a few minutes ago,

What’s with that? The article is linked right from their front page.

Another (Canadian) news source that was high up in the Google News rankings warned that Hawaii could be the target of 7 metre waves. That would be more than 21 feet high… maybe 7 feet would be closer.

CNN made up some news based on not knowing what time it is here:

We’re not in a danger zone, but we now have fully charged cell phones, bottled water, and a full tank of gas in the car.

This warning is no joke.