She’s may be no saint, but Dr. Greenwood isn’t the problem either 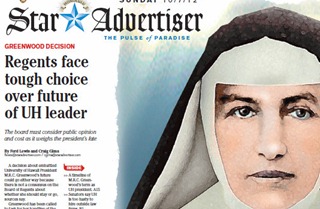 Why? Dr. MRC Greenwood may be no saint—the saint is the one on the right—but she received “excellent” in her reviews. Did the Regents make a mistake with those reviews? Is the inordinate pressure applied by state legislators and perhaps the Governor making the Regents feel they have to now take action amounting even to severance?

What state law gives the Senate or Representative Mark Takai any say in the details of the operation of the university?

There was Greenwood’s testimony before the Senate Special Committee on Accountability concerning pressure from the governor’s office, which in turn was being pushed by the Senate President, House Speaker, and other political insiders seeking Donovan’s reinstatement.

Sure, mistakes were made. Without excusing them, I suggest that the system itself, rather than this particular situation, is what needs fixing.

Not only does the system need fixing, there are consequences to the way that both the state government and the university itself have handled the aftermath of the mistake(s) and a loss of opportunity if it is dealt with simply by replacing the UH president. True “simply” may not be the best descriptor here. It will be a disaster if it happens.

What chances will the University of Hawaii have to find a capable president to replace Dr. Greenwood if the Regents should decide to fire her over the Stevie Wonder concert scam? Who would want to jump into a position where any misstep would be pounced upon by lawmakers and critics to the detriment of one’s reputation?

This is not the first time that UH has found and hired a “savior” and then later shot down the same person at great cost.

The media fail to attribute the current situation to a defect of governance. (See articles on the garbage can model as applied to college and university management.) Instead, it is treated as an exception and a spectacle.

The Senate committee’s third-degree of UH officials over the Stevie Wonder concert scam is good for a story a day in our daily paper. There is something juicy about putting the UH president under the hot lights and, most recently, speculating about whether she deserves to be fired.

It’s an opportunity for the paper to repeat her salary and benefits over and over. This has happened every time there is an issue over the UH presidency. And that’s about as deep as the media analysis gets.

The media highlight the costs of replacing the president by citing the terms of her contract. You can bet that the next president will try for the same protective contractual devices or better, given the hazards of heading up our state university.

My highest dream for the university is that they bring in a bunch of organization development professors from (say) Harvard to analyze and suggest changes to the structure of governance at the University of Hawaii. This would include clarifying rules of succession.

What we have now is a typical “garbage can” organizational model. And it predicts that in a situation such as the university is faced with right now, they would simply “reach into the garbage can” for a solution. Hence Donovan’s shift to a previously non-existent position. Hence the expenditure of hard-to-imagine large sums on legal advice, as listed up in this morning’s newspaper article.

Why “garbage can model?”

Does “boundaries are uncertain and changing; decision-makers for any particular choice change capriciously” sound like what we are reading about how the current incident has been handled?

A well-run company such as General Electric does not operate on this model, and I doubt that Harvard does either. Of course, UH is not GE. The differences between corporate and academic governance are fundamental, including the inability to fire or control the most important staff (i.e., those with tenure). This is not a defect (tenure), it is one of the reasons that a college or university must find a model that works effectively this year, next year, and onward into the future.

In GE, if an upper-level manager with excellent reviews makes a mistake, no board will call a meeting to deal with it. The management structure will react, if necessary, in an appropriate way, including taking no action. Believe me, any manager with, say, a dozen years in that company knows what is necessary to make sure a screwup doesn’t happen again. If replacement should be necessary, that will be handled by management as it has in the past. The organizational structure is not composed of garbage, it has been developed over many years to be strong and robust and of course, profitable.

It’s clear that the Legislature, concerned as it is about its sports entertainment, and having little it can do under statute to assist the university when problems arise, will place blame, and perhaps push for corrective action in this one circumstance. I reviewed only part of the interrogation session and did not notice any offer to assist. Maybe I missed it. It’s a huge blame game. Some think that seeking blood will solve something. It won’t. What UH needs is a well-designed makeover.

What we are seeing unfold instead is a fiasco much larger than the Stevie Wonder scam. The danger is that vast sums of money that could go towards education or salary will instead go into legal and settlement costs, and UH will end up with a leadership crisis and no improvement whatsoever in its governance structure. The next time there is an “incident,” or should legislators be unhappy with a team’s performance, the cycle will simply repeat.

The garbage can does not need to be perpetuated, it needs to be replaced.

Seems like abercrombieʻs short arms have been reaching far and wide to pressure gov. officials - not just this uh issue.


Well stated, Larry, so how do we citizens make it happen?