This afternoon there are two trials scheduled in Hawaii District Court related to disorderly conduct charges filed against Laulani Teale on disorderly conduct charges filed against her at a protest on May 1 at Kapiolani Park. The first hearing is whether independent media will have access to video the Teale trial following immediately. There is also an issue (not before the court of course) of whether the courts are denying justice by delaying the trial without good reason. The original hearing was continued because the four arresting officers did not show up. The second was continued when the judge questioned the right of independent media (with `Olelo cameras) to cover the proceedings.

First, the background on this case: Click the link at the end of this snip for the complete article and pictures:

Activist and Hawaiian cultural practitioner Laulani Teale was arrested during the City of Honolulu's annual Lei Day May 1 festival at Kapiolani Park when she and a group of 6 protesters including artist Michael Daley tried approaching Mayor Carlisle to ask him to return the Kānāwai Māmalahoe banner and other artwork the police and City crews unlawfully seized from the (De)Occupy Honolulu encampment. Teale was the only one arrested. 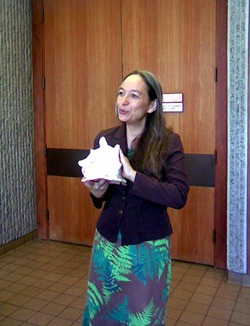 (photo shows Laulani Teale outside the courtroom on August 19, 2012 showing the conch shell that HPD described as a “weapon” but that didn’t bother the security checkpoint at the courthouse at all)

The case is important enough on its own right, involving (in my view) the right of citizens to petition their government peacefully. I’ll have more to say after the trial today. This is assuming that it is allowed to go forward.

Here’s what I wrote as part of a rambling article on September 19. This introduces the media access issue:

…the original trial was continued because the four arresting cops didn’t show up. Now, if the defendant doesn’t show up, a warrant is issued. But it’s ok for the cops not to show. So ok, one continuance.

Today a different judge objected to the `Olelo video camera. The previous judge approved the application for extended media coverage. This judge questioned whether the organization applying for the certificate is a qualified media or education institution. And get this – the approval was for a television camera, and the judge said “The court does not see that there is a television camera” in the courtroom. The camera was plainly marked with two `Olelo stickers. Sure, it is a little bitty thing compared to a giant studio camera, but this is 2012, not 1956.

The judge said that she is not in a position to reverse the decision of the previous judge but doubts whether the order was properly granted. So what did she do? Another continuation. The judge allowed the prosecution to introduce their witnesses to the record but not the defense, and then continued the trial until October 17, before the previous judge. She then apologized to the prosecutor’s witnesses for the continuance, but not to the defense witnesses.

What’s with that? I won’t even speculate. Who knows, one day I might face a traffic violation before this judge. But what a waste of money, and what a huge trouble caused to the defendant and her witnesses.

The media access issue caught the attention of the Hawaii ACLU. They have filed a motion and an amicus curiae brief with the court (see documents, below). The motion and proposed amicus brief were filed by Hawaii ACLU attorneys Daniel M. Gluck, Lois K. Perrin and Laurie A. Temple along with Alston Hunt Floyd & Ing attorneys Paul Alston and Brandon M. Segal. Some snips:

The Hui applied for permission to provide extended videotape coverage of the criminal prosecution of Defendant Laulani Teale (“Teale”). The Application was granted by the Court (the Hon. Dean E. Ochiai, presiding). Subsequently, on September 19, 2012, the Hon. Paula Devens-Matayoshi (presiding judge) continued Teale’s trial and expressed concern that, based on her review of the Hui's Application and the Court’s Order, the Application may not have been “providently granted.” The Record is unclear as to why Judge Devens-Matayoshi apparently sua sponte directed
reconsideration.

Sua Sponte means “Latin for "of one's own will," meaning on one's own volition, usually referring to a judge's order made without a request by any party to the case.” Snipping a bit more, with citations omitted:

The Hawaii and United States Constitutions guarantee the press a right of access to judicial records and proceedings, with primary underpinnings in the First Amendment. U.S. Const. amend. I;  (“[T]he press and general public have a constitutional right of access to criminal trials. . . . [T]his right of access is embodied in the First Amendment, and applied to the States through the Fourteenth Amendment.”). This fundamental premise is grounded in three important policy concerns: to “(1) promote community respect for the rule of law, (2) provide a check on the activities of judges and litigants, and (3) foster more accurate fact finding.”

(The copy below should be considered an unofficial copy, do not rely on it)

To know Laulani is to know pono-ness, dedication, truth and sincerity. You're my heroine.


I second ku ching's support for Laulani. She is brave, she is gentle, she is tough, HONEST and unwavering. Hawaiians are both a people of aloha and warriors. She personifies both those attributes. The Queen may have yielded power temporarily to the United States until such a time as the US recognizes justice and undoes the crimes committed by its Minister, the annexationists and the Marines of the USS Boston. I have great respect for her and her life work. But it falls upon both native Hawaiians and American citizens to fulfill our obligations and make sure the Queen's hope is, eventually, met with a just resolution.

Laulani is doing her part to put Hawaii's future on the path to pono. She is, indeed, heroic.