First the Jews, now the Muslims, and then the rest of us

As young adults my generation knew that things were not perfect with our country, but we assumed that our democracy would get better. When necessary we marched on Washington. We voted and volunteered.

Mostly, things did get better, at least superficially. The economy boomed. Political enemies (e.g., the Soviet Union) were replaced by economic enemies (e.g., Japan) as we did our best to compete instead of shoot.

Of course, we were deluded. The shooting took place largely out of public view, but it continued. A succession of US presidents found ways to conduct overt or covert war while public and congressional resistance diminished and then disappeared.

Today President Obama oversteps his authority by waging war in disregard of Congress. Some have noticed, but by and large the American people have placed no obstacle in his path.

So it seems our generation may be responsible not for fixing things, but for creating even larger messes at home and abroad. My use of “messes” is obviously inadequate, but it lets me continue writing with what shred of dignity I have left.

At present, we can’t blame any economic enemy for the plight this country finds itself in. We brought it about ourselves. Or rather, the banksters and their vassals in government did. But we do have Muslims to kick around. And that’s exactly what we are doing.

From bullets in Afghanistan to torture in Guantanamo, to New York police spying on mosques up and down the east coast, the attack has moved to US territory.

One thing is sure: it won’t be limited to the currently fashionable enemy.  Historically, we are very fickle in choosing enemies.

Who will be next? 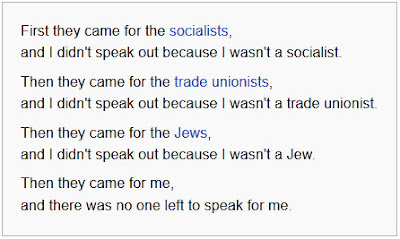 As we’ve seen in the past year, extreme police brutality has been focused not on Muslims but on anyone engaged in peaceful protest. Yes, Martin Niemöller’s “First they came…” still has meaning today.

In Hawaii, as elsewhere, justice lags behind illegal acts of government. In fact, there is no redress in sight for the illegal confiscation of property from (de)Occupiers on Beretania Street in Honolulu. The city and county of Honolulu simply dumps their things into garbage trucks in violation of their own ordinances, and of course the Fourth, Fourteenth and occasionally the First Amendments to the US Constitution.  Raids have become routine. No attorney has appeared on a white horse to defend our Constitution.

Yes, defend our Constitution. Although the police act today against the demonstrators, there are laws on the books that can be used to confiscate the property of just about anyone. In the recently aborted Global Horizons human trafficking trial, regardless of the merits of that case, the Department of Justice was in long-term possession of about 77 hard drives and countless boxes of documents, effectively putting the defendant out of business. Cops can seize cars and even real property in connection with drug charges, for example.

Pre-emptive raids and arrests have been used to counter peaceful demonstrations.
In case we haven’t noticed, the government is coming for more of us, and soon no one will be left to speak.

Click over now to read What Is Happening to Muslims Will Happen to the Rest of Us (Truthdig, 10/1/2012) by Chris Hedges.

It appears Niemoller used variations of the "First They Came For" list before it became codified. Nonetheless, certain versions are probably inaccurate. Here is the version I am most familiar with:

In other versions, he listed the disabled, Jehovah witnesses. Some versions omitted Jews. Some recent versions have included gays, though Niemoller never did. Niemoller had been supportive of Hitler in the early years and only slowly moved into opposition. The evolution of his opposition, from "silence" to "uneasiness" to resistance is instructive for those of us wrestling with our responsibility for what our government is doing and our discomfort with engaging in more forceful resistance.

A full discussion of the difficulties in trying to come up with Niemoller's "true" quote, can be found here:
http://www.history.ucsb.edu/faculty/marcuse/niem.htm#mayer

Thank you for that discussion and the link. I assume, though, that the ending is the same more or less.

People view the HPD harassment of the (de)Occupy protestors as justified because they are occupying space on a public sidewalk. So anything done against them is overlooked. My view is that if it's so easy for us (collectively) to allow their Constitutional rights to be violated, who will speak up for us?


When they came for the light beer drinkers, I spoke out.