I suppose it’s cause for celebration when our daily newspaper notices Honolulu’s (de)Occupy movement at all. Never mind the poor article, at least they noticed. 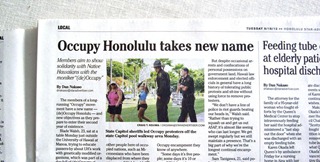 The members of a long-running "Occupy" movement have a new name — (de)Occupy Hono­lulu — and new objectives as they prepare to enter their second year of existence.

The name (de)Occupy is not new. From the start of the movement it was recognized that Honolulu (and Hawaii) is already occupied, hence the use of (de)Occupy.  The website deoccupyhonolulu.org has been in use since October, 2011. This snip is from an open letter posted in February:

The (de)Occupy Honolulu Thomas Square encampment was installed on November 5, 2011 to stand in solidarity with the worldwide Occupy Wall Street movement, which has been addressing the imbalances and injustices inherent in existing financial and political systems. Necessary and urgent discussion in regards to this issue, which directly affects most people today, and other relevant and inter-related issues are the reason why we MUST have an open, accessible, and public space that is available for people to assemble peacefully at all times. We established the encampment in order to provide a common space for citizens to gather and participate in creative solutions, in accordance with constitutional law, whenever they are able. …

As the snip notes, (de)Occupy began not one year ago, as the Star-Advertiser article implies, but on November 5, 2011. At least, that’s the date of the encampment, which claims to be the longest continuous encampment in the movement. In any case, the headline “Occupy Honolulu takes new name” is just wrong.

Somehow the article avoided mentioning “Monsanto,” which is what the protest was all about. Nationwide, Occupy movements have been raising awareness to try to stop corporate GMO giant Monsanto specifically.

Also, the picture accompanying the article shows these two domineering sheriff figures escorting two smaller demonstrators from the State Capitol pathway. Why? Did the reporter ask? Isn’t free speech allowed at the Capitol? Did the explanation get cut from the article?

Other media (e.g., KHON) reported that Occupy has sent up a new encampment at UH Manoa at the corner of University and Dole Street and plans to be there for a week.

Sometimes I find myself thinking that it’s a good thing Honolulu no longer has a paper of record.