It was such a pleasure sitting down early this morning with the Sunday paper spread out on the table, reading David Shapiro´s flASHback and then Richard Borreca´s On Politics columns.  I wish everyone could have the chance to read both of them as well as the editorial page articles on Rail by the attorneys from the Native Hawaiian Legal Corporation and the lame response by Dan Grabauskas.

Why "lame?" Well, for example, I love this part:

... These efforts taken together underscore HART´s commitment to flexibility and to following the law.

If the Supreme Court´s unanimous decision means anything, it demonstrates that HART and the city had no intention of following the law. I doubt they´ve had a sudden change of HART on the matter (sorry, but all the good Rail puns [like Grabauskas´ "the delay will not take the project off track"] are already overused).

We won’t have Mayor Carlisle to kick around any more, he won’t be around after the general election because he lost the primary. But all the other players will still be in place. If they have skirted the law, it will come out.

Just look (if you have a copy of the Sunday paper) at the narrow exploratory excavation trench pictured on page F4. (Or log in to your online account, if it will let you, it won´t let me in today.) The survey trench pictured is so narrow that there could be iwi (remains) on either side, and of course they would not find them. If this is how the city is surveying to meet the legal requirements, then they would be better off without a HART since they have no brains either (sorry again).

Should the track construction proceeds, what do they think they´ll get away with when they encounter remains next to their trenches?

Anyway, I hope they´re doing more digging than that picture would suggest.

Richard Borreca´s column this morning, Court ruling puts Caldwell between rail and hard place, is important enough that everyone on Oahu should have the opportunity to read it. In a couple of succinct paragraphs Borreca is able to convey quite powerfully what I´ve spent many articles ranting about. Snipping wold be difficult, but let me offer this by way of illustration, and hope you´ll be able to find your own copy of the paper somewhere:

Hint to the city: Do not even think about telling the feds you want their land. Hint to city No. 2: Do not tell a building filled with lawyers about eminent domain. And hint to the city No. 3: Ditto for the state.

The trouble with fair-use snips is that Borreca developed the context in earlier parts of his article, and I can only snip a little.

Let me show you in pictures what Borreca is talking about.

This is the federal courthouse at 300 Ala Moana Blvd. (click for larger). As you see, the feds are serious about security. The property is separated from the street by concrete barriers and planters. The street is monitored by numerous CCTV cameras on the building itself. Since the picture was taken, I think many of the gaps visible between barriers in this Google street view have been filled in.

My understanding is that the justices have objected to the plan to install an elevated rail structure just outside their chamber windows as a security risk. Also, they would have to give the city a lien to install the structure. They may not want to do that. Shouldn’t the city have worked this out with the Court before beginning construction?  In a sane universe, yes. 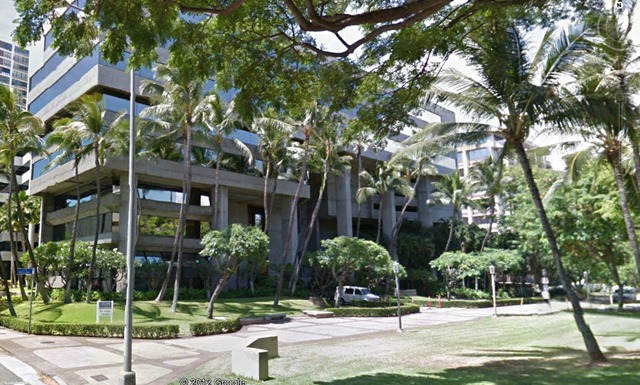 This is the “building filled with lawyers” that Borreca mentioned. It’s also one of the most pleasant and picturesque spots in the downtown area, a grassy mall that’s an oasis away from traffic noise, and a spot that has appeared in Hawaii Five-0 episodes. It’s worth defending, and no doubt the attorneys within will do so. But it’s also a reminder that any place where the elevated train tracks or platforms are visible will not appear in any movie. The tracks are ugly.

Borreca mentions the state tax office. I didn’t bother with a picture of that. I have mixed feelings about the design of that building. Certainly, a train track is not going to make it more attractive. The train would ruin the entire area, of course.

The chances of the train advancing into Waikiki in the future are also dimmed by the likely objections of residents and hotel owners to having the noisy and ugly cars whiz by now-pleasant lanais, spoiling their ocean views and ruining property values.

Look, bottom line, the city has mismanaging the rail project from day one. They think they can shove it down people’s throats, or hurry the signing of contracts so the project won’t be stopped. It didn’t work.

The Supreme Court did not stop the train, the city’s lawlessness and disregard for the people it is supposed to serve did that. As to Grabauskas’ devotion to “flexibility and to following the law,” we are not stupid.

There are a certain number of people related to transportation governance in this city who should be removed— and it’s not just for the train. It’s for pathetically poor road maintenance, their unwillingness to create a pedestrian- and bike- friendly city, and their responsibility for a high and unmitigated annual death toll in crosswalks. Oh, and for the idiocy that we do not need or want public toilets in town or at transit facilities.

I hope at least that they provide a sufficient number of bushes near each station for riders who get off and need a place to go.

[As an example of the DOT’s disregard for the public, the new Alapai Transit Center has opened with no public toilets and only two single-toilet rooms for the large number of bus drivers only.  I hope there are enough bushes there for everyone else. (See: Lack of bathrooms at transit site has Council questioning the city Star-Advertiser, 8/30/2012) ]