City stares into a hole filled with trouble 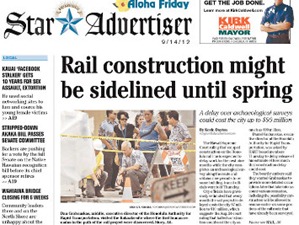 The Hawaii Supreme Court ruling that stopped construction on the Hono­lulu rail line is expected to delay work for the next nine months while the city completes an archaeological survey along the route and obtains new permits to resume building, transit officials were told Thursday.

City officials have previously estimated that every month the rail project is delayed costs the city $7 million to $10 million, which suggests the Aug. 24 court ruling that halted construction could cost the city as much as $90 million.

No, that’s not quite it. The city’s full-speed-ahead-regardless-of-the-law recklessness in issuing contracts before completing the required archeological excavations is what is resulting in additional costs.

$90 million! Why isn’t the newspaper upset about that?

The Supreme Court merely held the city to the existing law. The court did not cost the city any money at all. They did that to themselves.

This is Honolulu, which like the Hadleyville of High Noon, has become a town where law and order cannot be relied upon. This is perhaps why the word Superferry is invoked occasionally in connection with Mufi’s rail project. In both projects, special interests, the complacency of lawmakers and the apathy of citizens resulted in scenarios where a Marshall Kane must arise to face a showdown in which moral courage triumphs in the end. The plaintiff in this case did what she had to. Paulette Kaleikini is our Marshall Kane.

There is one more lawsuit pending that could impact Honolulu’s rail plans. Should it go against the city, the newspaper (and we) should only blame the city, not the courts.