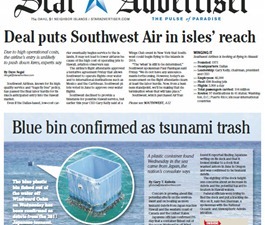 The newspaper advises that tsunami trash has been spotted in the waters near Hawaii. In addition to the blue bin featured on the front page of today’s paper, there is also a pic of a section of floating dock that was spotted on its way here.

Less noticed is the amount of junk originating in China that is accumulating here.

Well, the iPhone 5 went on sale here on Friday, and of course there were long lines outside the Apple stores.

Hundreds of Hawaii smartphone shoppers started their day Friday in the dark, scurrying to secure a place in line for the launch of the highly anticipated Apple iPhone 5 smartphone.

Am I calling the iPhone 5 junk?? No, no. Far from it. This is one lean machine:

Compared with previous versions, the iPhone 5 is thinner, lighter, has a taller screen, faster processor, updated software and can work on faster "fourth generation" mobile networks.

The iPhone 5—gotta have it.

But look—if you have just bought an iPhone 5, doesn’t that obsolete whatever it is that you were using previously? Your old Nokia, for example. Who needs it? Who would want it? Even your iPhone 4. Useless now.

Of course, any article on the iPhone would not be complete without checking in with uber-early-adopter Ryan Ozawa, and the reporter found him right there on the Apple Store line. Ryan mentioned an incompatibility issue that comes with the purchase of this new model:

Also, Ozawa said that docking stations in people's cars, home sound systems and the like are not compatible with the iPhone 5's shortened connection port, necessitating the purchase of a $29 adapter.

Well, some people will be happy with the adapter, but others won’t want the phone wobbling on top of their docking port. So no doubt the old accessories will become obsolete for many of those moving up from a previous iPhone. Besides, new accessories are coming out all the time. Gotta have them.

Ryan may be an extreme case. I have no doubt that he has purchased not only the iPhone 5, but the 4, the 3, the 2 and the 1. Just guessing.

All that stuff, plus all the Nokias, Razrs, Blackberrys, and so forth, each item containing rare earth metals and other contaminants, are just lying around all over the island.

I wonder if, pound-for-pound, we have more junk here from China than will wash up from Japan.

I exchanged my new iPhone for two of the children who were responsible for assembling it. They are much more useful. They can cut grass and cook and clean house and do all sorts of cute things while that silly phone was pretty much just a vanity item. True, I have to feed the kids but they will last much longer - 20 years if I don't push too hard - and they are not made obsolete every 6 months. Overall, a much better investment of resources. So go down to that shiny Apple store. Tell them you are offended by the export of all those jobs and ask for the exchange of one phone for two Chinese children. It's a good deal!


Bravo Larry and fellow anonymous contributor. No need to add anything!