Better graphic, but no prize, and the subject of traffic deaths and injuries is really important 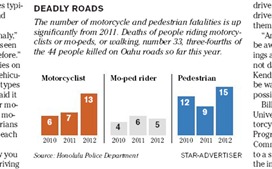 I was happy to see that the Star-Advertiser has figured out that graphs proceed in time from left to right. Today’s little graphic does it right in that respect.

But the graphic fails to represent the data in a way that we can understand. 2012 isn’t over, but you’d have to read the text above to learn that the 2012 bar is only the year so far. What about the 2010 and 2011 bars? Are they for those entire years or for only up to this day in each of those years? Hard to tell. So the value of the graphic is greatly diminished. A reader expects that a bar marked 2011 contains data for 2011. Is that the case? If not, then either be clear or don’t use the graphic.

Speaking of traffic fatalities, both the Star-Advertiser and Civil Beat published articles on the high rate of pedestrian fatalities. The Civil Beat article is by far the better, and mentions several issues around driver behavior and road and intersection design. Check it out.

While repeating the usual admonitions that pedestrians need to be more attentive, etc., neither confronted the issue of lack of enforcement of Honolulu’s traffic laws, and only barely touched on the city’s neglect to implement crosswalk or intersection designs that would avoid killing people.

Years go by while neighbors complain of injuries and deaths at certain intersections with no remedy put in place. It seems that there is some unspoken death quota that must be reached before a traffic light, flashers, or other improvements are installed.

The pedestrian death toll, particularly among the elderly, is high not because granny is crossing distracted with her nose in her iPhone screen or rocking to her iPod, but because, in many cases, the crosswalk timer is insufficient to allow her to cross safely. The Department of Transportation knows this.

The DOT also has known for some time which are the most dangerous intersections yet they remain dangerous year after year. The Civil Beat article lists some of them. If they do an article next year, the list may well be the same. And the year after, and so forth.

The Honolulu Police Department, for their part, simply does not enforce the traffic laws. I live near a “dangerous intersection” yet have never, in the years I’ve lived here, seen cops issuing tickets to drivers who cut in front of pedestrians in the crosswalks, who turn on red without either blinking or waiting for pedestrians to clear through the crosswalk, and who are not uncommonly yakking on their cell phones while driving. The intersection is regularly packed, during rush hours, with cars that ooze into the middle of it as the traffic light turns yellow, blocking the intersection and the crosswalks. A person on a scooter or in a wheelchair can’t get across without risking life and limb.

Periodic (intermittent) enforcement should make drivers think twice before racing through intersections or turning left long after the light has turned red and pedestrians are in the crosswalk.

Simply reporting on the number of deaths and re-identifying the dangerous intersections doesn’t come near completing the job. How about it, paid journalists, won’t you dig into the real causes of Honolulu’s inexcusably high pedestrian death toll (not to mention injuries), and ask hardball questions of city and state authorities? Just as an example, the Civil Beat article mentions “inadequate signage” but goes no further. Where and why are signs inadequate, and why are signs not corrected? As to enforcement, why not pursue that, especially given that

The study found that about two-thirds of the Oahu drivers involved in pedestrian fatalities were to some degree responsible for the accident.

And then please ask again when nothing is done to improve the situation. And again and again until something is done. You have the power, the power of the press.