Do your own political “polling” by mining tweets

It may be too early to kiss SMS Research or Gallup goodbye, but maybe one day soon… because there is another way to do a poll, and you can do it yourself.

Check out Topsy Analytics, a website that mines Twitter data. Of course, doing it their way means that certain demographics (for example, non-tweeting Baby Boomers) are not included in the results. Still, you can do this “polling” (more accurately perhaps, “surveying”) yourself.

Here’s how they calculate the index for the presidential race:

Topsy calculates the daily Index for each of the presidential candidates taking into account both the mentions of the candidate’s last name (i.e. ‘obama’ and ‘romney’) and any direct mentions of the candidate’s official Twitter account (i.e. @barackobama and @mittromney). The Twitter Political Index values are shown beneath each candidate in the screen shot below, ranging from 0 to 100.

Let’s see how this methodology worked for some of the Hawaii races, using a simplified form available on the web.

I snipped these images from the web page for the particular search. If you click on the image, you’ll go to the Topsy website, where it is interactive. You can move your mouse over the graph to get information about the particular tweeting going on at any point in time. You can also do your own search.

Here’s the Honolulu mayoral race for the last two weeks: 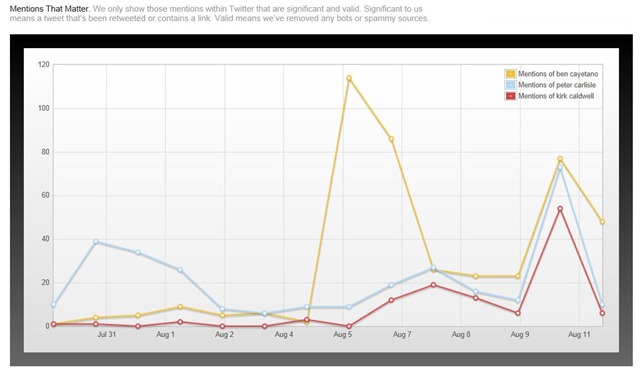 Cayetano is the gold-colored line, and it started to trend strongly on August 6. Cayetano, of course, won.  Earlier (to the left of the chart) it looked more like Carlisle. Clearly, some study is needed to make best use of these graphs.

Again, if you click on the chart, you should be taken to the original, interactive graph.

For the 2nd Congressional District race, it appears that Ed Case dominated the twittersphere most of the time (for this graph, I used “Hirono” rather than “Mazie Hirono,” because it seems that most tweets used only her first or last name. The 2nd chart below uses just “Mazie.” It may take a bit of interpretation to use these graphs in situations where a candidate may commonly be referred to in more than one way. And sure, if there is another Mazie out there, these will not be so useful.

Hirono is blue, Ed Case is red, and Linda Lingle is gold. She didn’t really excite tweeters the way the Dems did, but of course, it wasn’t a three-way race. 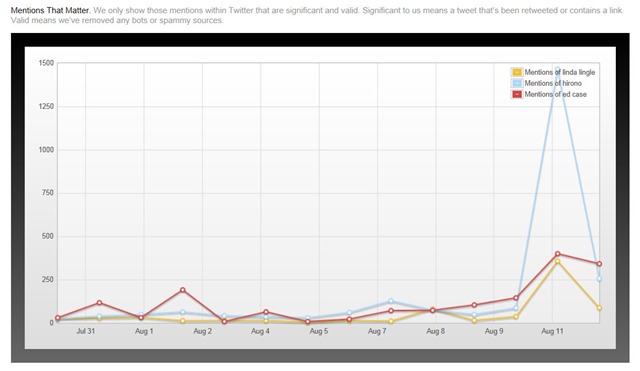 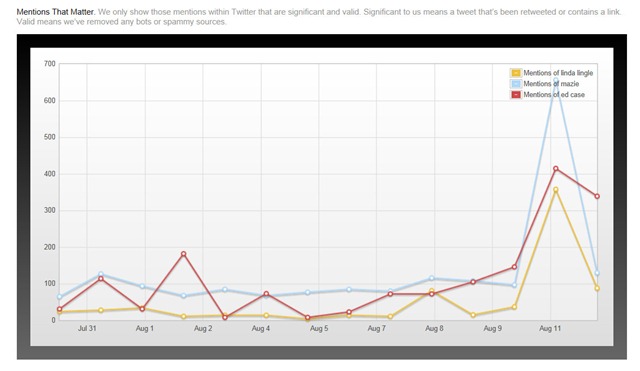 I thought I would check out the Big Island. I was curious about the defeat of long-time senator Bob Herkes. The problem is, there were no significant tweets at all.

So maybe we still need Gallup.

Here’s how the presidential race is going right now, according to Twitter. Click the image to go to the web page. 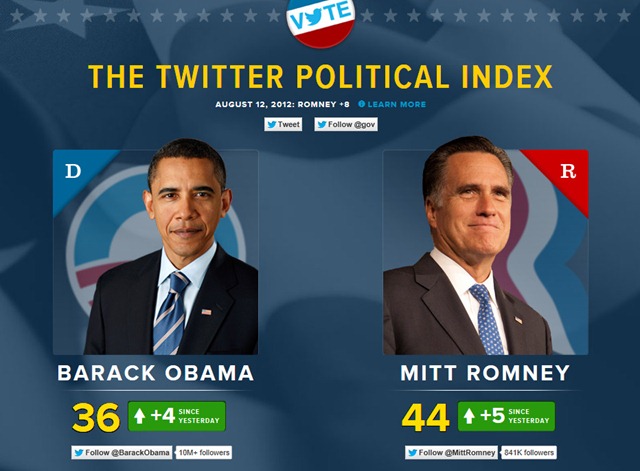