August 1 is the anniversary of the Hilo Massacre 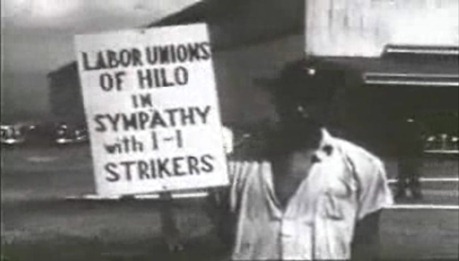 (images snipped from the video referenced below)

From the Wikipedia page:

The Hilo Massacre was an incident that occurred on 1 August 1938, in Hilo, Hawaii, when over 70 police officers attempted to disband 200 unarmed protesters during a strike, injuring 50 of the demonstrators. In their attempts to disband the crowd, officers tear gassed, hosed and finally fired their riot guns, leading to 50 injuries, but no deaths.

Yes, it’s referred to as a massacre, but I guess it was local style—no deaths, but 50 were wounded. Both police and national guard participated in the attack on the peaceful strikers. 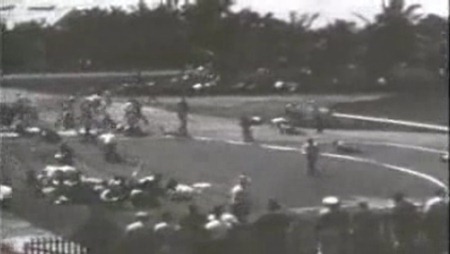 The strike leading to the Hilo Massacre was a multi-ethnic, multi-union mass effort that actually began on February 4, 1938. The unions involved were the Honolulu Waterfront Workers’ Association, the Inland Boatmen’s Union (IBU), the International Longshoremen and Warehousmen’s Union (ILWU), the Metal Trades Council, the Quarryworkers International Union of North America and the Women's Auxiliary of the ILWU. The workers demanded wages equal to what workers on the West Coast earned, among other demands.

On the other side was the Inter-Island Steamship Company, owned by one of the “Big Five” companies that dominated Hawaii’s economic and political scene at that time—Castle & Cooke, and by the Matson Navigation Company.

The Inter-Island Steamship Company refused the workers’ demands, leading to a strike at the port where the SS Waialeale, crewed by scabs, was to arrive. About 170-180 workers were on the docks when police opened fire with shotguns on the unarmed strikers.

As I read the history of this labor dispute and the disproportionate police response, I wished there were a YouTube video I could watch. These days if the police pepper spray unarmed protesters, we expect to have a ringside seat to the police violence. Guess what—there is an on-line video of the Hilo Massacre.

It’s on a University of Hawaii web page which contains also the contents of the definitive book on this incident, The Hilo Massacre: Hawaii's Bloody Monday, August 1st, 1938 (Honolulu: University of Hawaii, Center for Labor Education & Research, 1988). The short video is copyrighted material so I can’t reproduce it here, but if you click on the link above, there it is.

From the web page:

In view of the elaborate police plans they heard were being drawn up and the daily stories in the Tribune Herald of the impending return to service of the S.S. Waialeale, the Hilo union members called for a joint meeting on Sunday July 31st at the Hilo Boathouse near Coconut Island to consider their plans. Present were about 250 members of the ILWU, Local 1-36—Long-shoremen and Warehousemen; ILWU, Local 1-36—Clerks; ILWU, Local 1-36—Ladies Auxiliary; United Laundry Workers, Local 832; The Quarryworkers International Union of North America, Branch 284; United Automobile Workers of America, Local 586; and a Teamsters local of the Hilo Transport Workers Association.

Besides the video documentation, there are other parallels to modern demonstrations. In particular, the organizers stressed that the demonstration be peaceful. From the book:

At this meeting they also decided that careful precautions must be taken to be sure that their demonstration would remain peaceful, regardless of whatever provocation they might encounter from the police. They were afraid that the police and the newspapers would seize upon the smallest excuse possible to lay the blame on them for any violence. They would meet any police force with "passive resistance."

They were of course correct about the police and the newspapers. We see that in our daily newspaper which has a penchant for only reporting on demonstrations when there are broken windows or other property damage.

Another streak of modernity: women insisted on participating:

As they heard all these reports at their meeting on the 31st, consensus was quickly reached to proceed with a mass, joint demonstration. There was some concern about the women participating, in view of the possibility of a confrontation with armed police. But the women themselves insisted upon their right to attend. Almost two months earlier Theresa Hamauku of the Laundry Workers had written to the I-I strikers: "It takes lots of GUTS to face the whole world, and we know what it means to fight."4 She and her fellow workers had been through a rough organizing strike the year before, and neither they nor the Ladies Auxiliary were willing to back down on their pledges of support to the Inter-Island workers.

This was an important labor event in Hawaii’s history, but unfortunately one that did not result in significant gains for either the unions or compensation for the victims of police violence (isn’t that also so very modern?).

Check out the links above for more information.