Are eating insects a win-win solution, or has the BBC finally gone bonkers?


“Insects, or mini-livestock as they could become known, will become a staple of our diet, says [food futurologist Morgaine] Gaye.

It's a win-win situation. Insects provide as much nutritional value as ordinary meat and are a great source of protein, according to researchers at Wageningen University in the Netherlands. They also cost less to raise than cattle, consume less water and do not have much of a carbon footprint. Plus, there are an estimated 1,400 species that are edible to man.”

by Larry Geller (originally posted at The FreeRange Gourmet)

Could it really happen that we would be eating insects in the future? Heck, we’re eating some now (don’t click the link before breakfast). 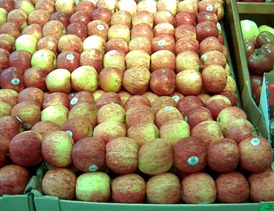 I’ve never been bothered by finding a worm in an apple (actually, finding half a worm would concern me more…). These days, when every fruit in the supermarket is perfect and nearly identical, I kind of miss knowing that the apple I’m about to eat has been found fit for consumption by another creature. I’m bugged more worrying what it is they spray on those fruits and if washing really takes it off.

"Rising prices mean we are now starting to see the return of meat as a luxury. As a result we are looking for new ways to fill the meat gap."

So what will fill such gaps and our stomachs - and how will we eat it?

Insects, or mini-livestock as they could become known, will become a staple of our diet, says Gaye.

It's a win-win situation. Insects provide as much nutritional value as ordinary meat and are a great source of protein…

Insects may be a great source of protein, but ask yourself: will the Queen indeed be eating insects in 20 years time? Probably not. I need to set you straight. Here’s the sidebar from your article headed “Foods we used to eat”. 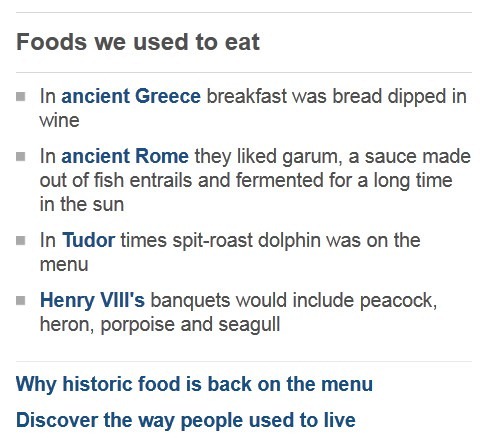 Who’s the “we?” in this? People make an assumption, when they look at the “good old days” of times past, that if they could go back in time, they’d be a member of the upper class. The odds are strongly against it.

Going back to Tudor times, while the noble class might have feasted sumptuously on spit-roasted dolphin, you might have been a scullery maid scraping pots in the kitchen, or one of the riff-raff huddled outside the servants’ door hoping it would open so you could catch a few of the scraps thrown out for the poor.

Times were hard for most, although clearly not for Henry VIII and his peacock sandwiches.

So I submit that neither the Queen or many sitting in the House of Lords will be breakfasting on locust omelets no matter how far into the future you dare to peer. Peer is the key word, dear chaps. They’ll still snack on peacock, heron, porpoise and seagull if they wish to consume those, not wasps and weevils because peacock prices have gone through the roof.

Forget peacocks, let’s get back to the insects.

We already eat insects. There are a couple of articles on the web like this one: How Many Insect Parts and Rodent Hairs are Allowed in Your Food? More Than You Think ... and Maybe Than You Want to Know! (sixwise.com, 6/29/2005).  At some point we could, if we wish, contemplate how many pounds of insects we already consume each year unknowingly.

I’m also reminded of the rumor we heard as kids that a certain chocolate syrup, essential in New York City to the proper creation of a drink called the Egg Cream (containing no eggs or cream), derived its special flavor from a unique blend of, um, insect parts. I don’t care about the rumor, it really is the only chocolate syrup that does the job. If we were consuming insects, so be it. I do miss my egg creams.

In Mexico I was served grasshoppers by my hosts and the little buggers were delicious. Maybe I was being tested. Little did they know that I’d been immunized by my diet of frequent chocolate egg creams.

Enough. What of the future?

As the film Soylent Green highlighted, while the burgeoning population was fed wafers, the moneyed classes still had their carrots, though they were well guarded to keep them out of the hands of the masses. Clearly, if they could get but a single taste of a carrot, they would no longer be content with their fodder. The 1973 film was set in the year 2020, now just around the corner, but neither universal wafers nor insect meal are likely to appear over the near horizon. Well, maybe insect meal… some healthfood nuts will eat anything.

While consuming insects might make sense economically and nutritionally, it is hard to see how the cultural resistance can be easily overcome. So will it take USDA oversight (meaning, not looking) to first increase the allowable proportion of insects in ordinary food to incorporate more bugs into the American diet? I can’t see millers shoveling bales of locusts into the wheat grinders, at least for fear of discovery. Not that they wouldn’t if they could get away with it.

On the other hand, do you really know what’s in your orange juice (you didn’t click the links above, did you)? Simply by doubling the current thresholds, insects could make a foothold in our diet.

Short of falling into abject poverty, Americans will not be digging grubs for their dinner.

No, I don’t agree with the BBC that any of this is going to happen anytime soon. Unless the Republicans get charge of the economy, that is.

When we were kids one of the "Waiter there's a fly in my soup" punch lines was "That's okay- we don't charge extra for meat."