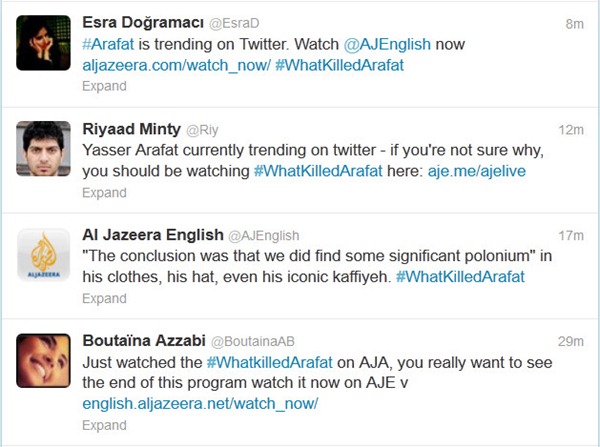 #WhatKilledArafat has just trended on Twitter coincident with an Al Jazeera English broadcast of a segment reporting on their nine-month investigation What Killed Arafat? Tests hint at possible Arafat poisoning (Al Jazeera English, 7/3/2012).

Nine-month investigation by Al Jazeera discovers rare, radioactive polonium on ex-Palestinian leader's final belongings.
…
Eight years after his death, it remains a mystery exactly what killed the longtime Palestinian leader. Tests conducted in Paris found no obvious traces of poison in Arafat’s system. Rumors abound about what might have killed him – cancer, cirrhosis of the liver, even allegations that he was infected with HIV.

A nine-month investigation by Al Jazeera has revealed that none of those rumors were true: Arafat was in good health until he suddenly fell ill on October 12, 2004.

More importantly, tests reveal that Arafat’s final personal belongings – his clothes, his toothbrush, even his iconic kaffiyeh – contained abnormal levels of polonium, a rare, highly radioactive element. Those personal effects, which were analyzed at the Institut de Radiophysique in Lausanne, Switzerland, were variously stained with Arafat’s blood, sweat, saliva and urine. The tests carried out on those samples suggested that there was a high level of polonium inside his body when he died.

The report barely hints at where that polonium might have come from, but readers may draw their own conclusions.

Please read the complete article or watch the video on Al Jazeera English.