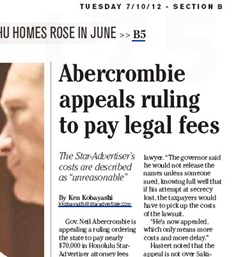 The gist of the story on page B1 of today’s paper is that Governor Abercrombie wants to appeal a judge’s award of $69,627 in legal fees which the state must pay because, bottom line, Abercrombie stubbornly refused to turn over a list of judicial nominees as his predecessors had done, and could not produce convincing evidence to back up his decision.

If the fees are indeed not reasonable, the state may be able to get some reduction. But in doing so, it risks running up even more legal fees for the appeal itself.

Guess who pays? We taxpayers pay. Next legislative session, legislators will put the fees into a bill and pass an appropriation to make us pay for it.

If the legal fees came out of the Governor’s budget, would he have pursued the case? Of course, that’s not how it works. Had the Governor thought, “Hmm,  if I persist in keeping the judicial nominee list secret, it could cost a bundle in legal expenses when I’m sued…” and decided to save taxpayers the expense, perhaps he would have just released the names. But of course, there’s no downside when money can be extracted from our pockets so easily.

In this instance, the state attorney general might have whispered in the gov’s ear what the judge ultimately decided: that he didn’t have a case. Drop it. Forget it. A snip from today’s article illustrates this:

The governor maintained that disclosure would discourage potential applicants who would not want it publicly known that they were seeking the judicial appointment.

[Judge] Sakamoto ruled in November that the governor did not provide any evidence that the disclosure would have a "chilling effect" deterring potential applicants.

While the governor's rationale might be "plausible," it was "speculative," the judge said.

A case without evidence is not a case at all. But hey, it’s only taxpayer money.

If this were the only instance, it might be dismissed as inexperience.

The Governor also chose to continue Lingle’s appeal of a case now in the 9th Circuit that seeks to cut off medical services to Micronesians and others. It’s not possible to predict the outcome, but should the state lose, there will still be legal fees to pay—all for an action of questionable morality and one that has brought bad publicity for the state. The case has two parts—the migrants entitled to health care under federal law, and other immigrants. Chances are that migrants will prevail, though the other half of the suit may not.

When Lingle first tried to cut off life-saving medical services such as dialysis and chemotherapy, her move was blocked, but an estimated 27 people were alleged to have died as a result of her action. I’m not sure that this number can be substantiated—the point is that the decision undoubtedly cost lives. Yet Abercrombie is on the same path. Do taxpayers really want to be responsible for this?

Yet another example of taxpayer money wasted—the state is paying for both sides of a legal dispute on discriminatory treatment of gay and lesbian couples. The Governor said in February that he will not defend the ban against same-sex marriage in Federal court because he believes it is unconstitutional. Great! But at the same time, he is allowing his Department of Health to defend the case.

So taxpayers will be paying to let Attorney General David Louie argue both sides of the same case.

There are also several cases that come to mind where AG review of laws or policies cold have saved taxpayers huge sums. One high-profile case was Burns-Vidlak v. Chandler which resulted in a $7 million settlement in March 2003. The state took it to the 9th Circuit. In the end, we taxpayers paid the costs of the state’s failure to screen its actions to prevent running up legal expenses.

That suit involved challenges under Title II and Section 504 to Hawaii's QUEST health care program. A review by the AG of the way QUEST was set up could have avoided the lawsuit and the taxpayer expense entirely. But that’s not the way things are done here.

The lawsuit was simple: the state categorical excluded blind and disabled persons from participation in the QUEST program prior to April 1, 1996. It doesn’t take genius to understand that this is unconstitutional discrimination in violation of Title II and Section 504.

Even more significant than the legal settlement is that an undetermined number of people died because they could not get medical care.

As long as taxpayer money is freely available, it’s not likely that caution will be exercised to avoid going to court in the first place.