Iran marks anniversary of US shooting down of passenger airliner in Iranian airspace on July 3, 1988

“Iran insists the attack on the airliner was unprovoked and called for the warship’s commander, William C. Rogers III, to be put on trial....In 1990, then-U.S. President George H. W. Bush awarded Rogers the Legion of Merit for his service as a commanding officer.”—Washington Post (AP), Iranians mourn victims from airliner shot down by US warship in 1988, 7/2/2012

What is this sound coming from my copy of the Star-Advertiser? It could be the “drums of war.” Iraq is over. Is Iran next?

Our commercial press is the last place to seek a balanced treatment of US foreign policy. Today is the anniversary of a great tragedy involving the shooting down of a civilian airliner by US forces in 1988, an event that continues to resound in Iran and the mid-East, yet the story has been buried in the US as the media stir up sentiment against Iran in preparation for… for what? Let’s take a moment to reflect on the extent of US intervention in Iran. For a more complete view, see the second Wikipedia link below. 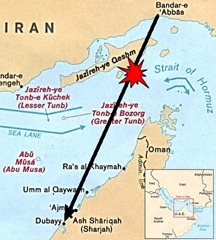 Iran Air Flight 655 was a civilian jet airliner shot down by U.S. missiles on 3 July 1988 as it flew over the Strait of Hormuz at the end of the Iran–Iraq War. The aircraft, an Airbus A300B2-203 operated by Iran Air, was flying from Bandar Abbas, Iran to Dubai, United Arab Emirates. While flying in Iranian airspace over Iran's territorial waters in the Persian Gulf on its usual flight path, it was destroyed by the United States Navy guided missile cruiser USS Vincennes (CG-49). All 290 onboard including 66 children and 16 crew perished. The incident is ranked ninth among the deadliest disasters in aviation history. It was the highest death toll of any aviation incident in the Indian Ocean and the highest death toll of any incident involving an Airbus A300 anywhere in the world. The Vincennes had entered Iranian territorial waters after one of its helicopters drew warning fire from Iranian speedboats operating within Iranian territorial limits.

Is this anniversary noted in our daily paper? Of course not. Instead, the Star-Advertiser joins other papers in beating the drums of war against Iran. 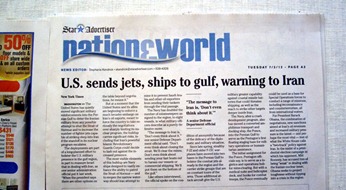 The headline story in the S-A nation&world section today is “U.S. sends jets, ships to gulf, warning to Iran.”

The press does a disservice to the American public by keeping it in the dark on American-Iranian issues and history. Readers know nothing about CIA plots and coups in Iran, for example.

To many, U.S. actions further solidified sentiments that the West was a meddlesome influence in Iranian politics. In the year 2000, reflecting on this notion, U.S. Secretary of State Madeleine K. Albright stated:

"In 1953 the United States played a significant role in orchestrating the overthrow of Iran's popular Prime Minister, Mohammed Mosaddegh. The Eisenhower Administration believed its actions were justified for strategic reasons; but the coup was clearly a setback for Iran's political development. And it is easy to see now why many Iranians continue to resent this intervention by America in their internal affairs."

Probably the average American on the street, if asked, would say that US intervention is necessary to stop Iran’s development of a nuclear bomb. They would be unaware that US intelligence agencies have reported that Iran has no such program.

If the US or Israel instigates yet another war in the mid-East, US media will again be complicit.